The things we do for cats.

“So the important thing is, is to understand that cats operate on smell.”

I held Tomaz to the shiny stainless steel table while I tried to listen to the Vet lady. Because my arms are softer than steel, he clung to them instead with good claws that the fire didn’t take away. I mentally noted they still worked pretty well. In fact,Tomaz actually was in pretty good shape overall here at the Vet’s office, enough so to receive his vaccinations.

But if you remember where we last left off, that was not the real reason we brought him in. We could tell he was having difficulty urinating, and even though he could urinate, it didn't seem to be a pleasant process for him.

tangent -most times it's a relief for us, amirite? And if you can't pee right, the world ain't right...anyhow, I digress. A lot. I told you it was a tangent.

Since Tomaz has never had UTI problems before, we were perplexed when his examination revealed he was still very healthy and hydrated. So what was the deal?

The final diagnosis- the beginnings of a Stress UTI (Urinary Tract Infection), all caused by the loss of Georgy less than 48 hours ago. Apparently, I wasn’t the only one affected by her death. For Tomaz, Georgy’s death brought on a whole different set of issues; unfortunately, ones that I was blind to.

Basically, Tomaz was paranoid. But is it paranoia if he was traumatized because Georgy did BULLY him?  Uh-oh.

The reality was that Georgy had stalked Tomaz so much those last two years, Tomaz was terrified of her. And she ruled the house, and me, without me paying the attention I should have. I just thought she loved me. LOTS.

Now with her being gone but her smell remaining,  Tomaz's little cat brain was in overdrive. Behind every corner, it was “COULD IT BE GEORGY? WHERE IS SHE? SHES GOING TO DIVEBOMB ME AND I WILL DIE.”

So right there in that tiny room holding a large irritated cat, I had a large epiphany.

I just diagnosed myself at the Vet’s office with Stockholm CAT Syndrome.

I nodded as the Vet was speaking, her being unaware of my new founded guilt. Feeling even more guilty that I might have missed some crucial instructions, I repeated what that she just told me to make sure I didn’t miss anything during my own mental diagnosis.

“To alleviate Tomaz’s stress, I should remove or clean everything that Georgy has touched, so that he doesn’t think she is there, ready to threaten him.”

“Correct. As I said, Cats are olfactory sensitive- its how they communicate, mark territory and become familiar with their surroundings. Also, he’s at the age- let’s see, he’ll be twelve this year- he’s at the age that you may as well switch him over to a UTI specialized cat food since neutered male cats as they get older can develop urinary issues. A can of moist food daily with water mixed in it should get him through this episode. Otherwise, really, he’s healthy, not dehydrated, no fever or other signs, so there really isn’t anything we can do here.”

“So I guess getting another cat to keep him company is a no-go.”

Great. Add more guilt to my guilt but make it guilt that contradicts the guilt I should have. Oh my.

Not only did I have to remove everything that reminded me of Georgy, to wipe her memory off the face of the earth physically, but getting another rebound shelter kitty was out of the question too.

I think it was because he was glad his intervention for me worked.

It took quite an effort to rid the house of everything of Georgy. New cat boxes, sanitized dishes, washed chair covers, bedding, beds, couches, chairs, everywhere a cat sits/sleeps/stares, wiping down corners where she had rubbed her little face because did you know cats have glands on their face of all places so they can leave their scent? When they rub against your legs or bunt their face onto yours, they are CLAIMING you.

And a hard one to clean up after.  You never notice until you have to wipe them down that there are corners EVERYWHERE in a house.

Cleaning, vacuuming everything- we did it all.

His UTI cleared up in two days, so it was clearly stress-induced. He loved all the attention we gave him, along with the new cat boxes, sleeping arrangements, toys, etc. In fact,  He began to relax almost immediately.

Feeling no stress, Tomaz claimed all the best cat sleeping spots in the house again. He meowed loudly for canned cat food, and he openly without guilt shredded the back door loudly to go outside. We were definitely on the mend.

So, of course, the Vet was right; since Tomaz no longer smelled the “threat,” he relaxed mentally and physically.

Except there was one thing that the Vet didn’t mention-

Cats have excellent hearing too.

It was obvious that whenever we would say Georgy’s name, Tomaz freaked. I mean FREAK. He’d pop up, alert, ready to run, frantic. A classic cat Panic attack. We took notice right away.

I knew I had to come up with a solution just so we wouldn’t have another Stress UTI episode. One is enough. So what was our resentful solution?

We needed to clean up her name too. Yep.

Georgy is now called “she who shall not be named” in our house.

This was not an easy task at first. In fact, Mr. Foresterman had my hand over his mouth more than once to stop him from making a terrible mistake. If we did say her name, it was only in the truck, at a store, or another state where we were sure Tomaz couldn't hear. We don't even try to say her name in a whisper. And it's a good thing we don't have guests over often. I don't think they would like my hand over their mouth really.

So our conversations at home kind of go like this-

“Did you remove the “she who shall not be named’s” mouse toy that was under the bookshelf?”

“Well, “she who shall not be named” would get those mice on the porch, no prob.”

“She who shall not be named” would have loved that”

“Gee, I miss “she who shall not be named”

I resented it at first but knew it was for the best. Okay, I still resent it but not mentioning her name alleviates Tomaz's stress, and that is what we need to do for him to stay healthy.

Like the title says, "what we do for cats."

So why all this effort?

Remember this first post  that started all these posts?

Because mentally this is how real this stress is to Tomaz, and other "sensitive" cats. It is not make believe in their little cat reptilian (my resentful passive-aggressive words, no one else's)  brain- they really feel threatened.

That incident (linked and highlighted above) happened a month after the Vet visit. While moving things around in our office to replace a cabinet, large bundles of Geor- “she who shall not be named” furballs that I hadn’t found yet came tumbling out from under the old office cabinets.

Silly human me thought nothing of it and planned on finishing vacuuming in the morning.

However, Tomaz loves the office – he sleeps in Mr. Foresterman’s inbox all the time- it’s his safe zen zone. HIS.

Yep. The very next morning Tomaz had his second and hopefully LAST stress UTI episode directly ON me. What a warm wake-up call. Not. I'm still traumatized.

Sheesh, talk about cleaning pressure…forget Mothers-in-laws, this cat has game.

Without wasting time, we immediately vacuumed to his specs, gave him double cat food cans with water (he’s got my number now), and the issue cleared up in less than two days again.

And we have not had any episodes since then, because-

MY HOUSE IS CLEAN of SHE WHO SHALL NOT BE NAMED.

meanwhile, I bought this pillow 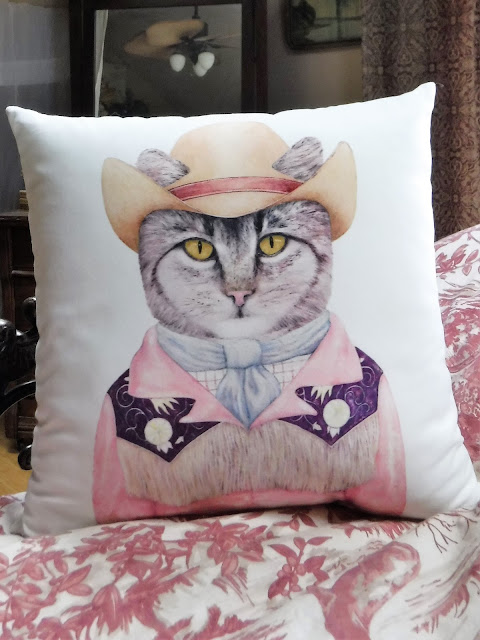 I think
I may have to go to the Vet again
to diagnose a new syndrome
to replace my old one...