Skip to main content
April 17, 2018
Tomaz and Georgy at first were enamored with each other.  They slept together, hunted together, played together.  It was a beautiful thing. When we brought this beautiful spayed tabby home from the shelter, I do believe Tomaz thought she was a gift just for him. 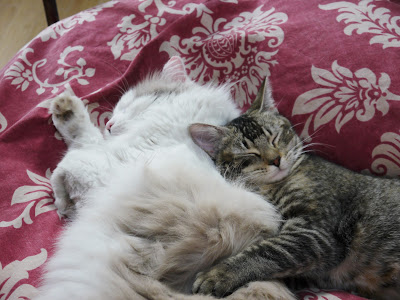 But then something happened. We still are not sure what did occur, but they became unfriends. And Georgy decided she needed to take control. 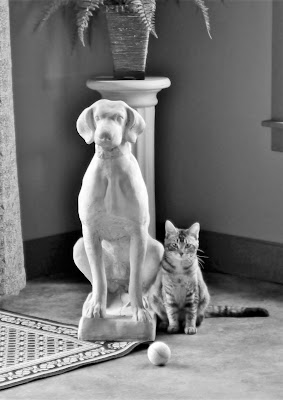 And as Queen, she labeled Tomaz as a lowly page. She let him know it.

She took these royal duties very seriously. Even the dog wasn't safe. Poor Ranger. A slap on the nose for just existing. And if she wanted something, she had dibs first, and our poor ninety-five-pound dog knew it. Once in a while, he would whimper in another room, and we knew it involved her. We didn't even need to investigate, because she was QUEEN.

She became so full of herself. She even made it heard through her walk. You knew when she was walking into a room. THUMP THUMP THUMP. Queen Cougar walk we called it. “Georgy has arrived!”  I’d say, laying under the covers, waiting for her to pounce on me to begin our day. I’d chastise her, warning her each time like my mother did to me- “You're gonna get heel spurs!”  (Yep. My mom was an RN.)

But Georgy would ignore my warning, headbutting me in greeting, because, well, Georgy.  Even adoring her was on her terms. You had to hold her like a baby and pet her right, otherwise its claws and teeth.  But oh how you were rewarded if you did it right; being loved by a sleepy-eyed, baby octopus grip little bundle of fur, WHO LOOOOVED YOU!!! - I fell for it every time. Dang could she adore you and make you feel loved. In the kitchen, the bathroom, outside to get the mail, to feed the horses…she was my little buddy girl.

As I said, she became Queen. 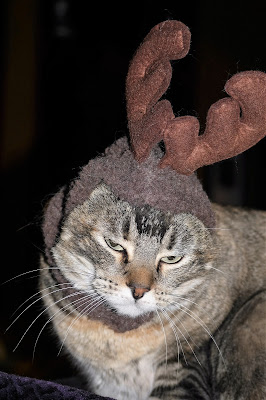 And of course being the obtuse feral being that I am, I didn’t take true notice of what Tomaz was going through.  After all, they were friends, ONCE, maybe they will be friends again. And he is Fire cat: he is TOUGH.  Poor boy though; he was living in the shadow of Georgy.

When we would open the door to let Tomaz in, he would dart into the pre-selected rooms (by Georgy of course) in which he was allowed respite. She would still challenge him at the dish, at the door, on the couch though. He was either having to choose to fight or retreat, now both outside AND inside. It was awful.

We tried to make it fair.  We tried to reintroduce them. We tried to give them attention and toys and cat drugs. But now I was becoming the issue because Georgy claimed me as her own. I was no other animal’s mom; I was hers, and hers alone.

And it was my fault in a way, as it was reciprocal.  She had a significant impact in my life because she became my writing cat. You writers know all about that special kind of relationship you have with an animal who chooses to sit next to you as you write. 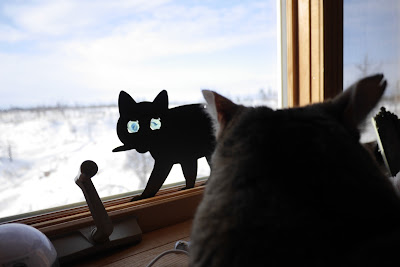 Georgy was there for ME.

Did you notice I wrote this entire post in the past tense? 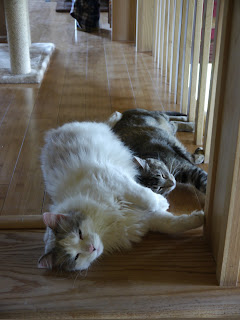