I debated about writing about this next part.

But then if I'm avoiding something, there must be a good reason why.

I don't want to forget about Georgy. This was my first girl kitty in decades, and she really did follow me everywhere. We were the only girls of the household. We even talked (okay, ME) about bringing her to work in the woods...so many good memories! And she really did love to cuddle with me, even when I was in the bathtub (maybe not so good memory; naked is not a good place to be with a clingy cat...) She was only four years old, and we were supposed to grow old together. When something like this happens, it shocks you, because it was not expected.

But generally, I am a good-natured person. Focusing on negativity is really not who I am. So avoiding writing about how she died makes the event almost untrue, in a writer's mind. And you know how we love rewrites.

So I needed to write this true.

We worked it out this weekend, and today I am sharing this post with you.

When I am under pressure, stressed, I can step out of myself and become someone I don’t sometimes recognize.  I’ve had professional training to do this, I've been paid to do this. It has kept others and me alive. Now it meant something else.

I gave Georgy the heaviest opioid I had on hand, one that was given to me when I went through my own DVT event, ironically.  It would kill her, but not fast enough. It did, however, make her sleepy, which is what was needed.

FYI Cats do not process any drug very well due to their unique system, so never give your kitty any medications, including wormers, without consulting a Vet first.

I wrapped her in one of her favorite blankets; a hole cut for her head to fit through.  I swaddled her gently. This restricted her movement so that the correct humanely placed headshot would be a swift death.  She was too sleepy now to protest, but still in massive pain. I placed her in the box that Mr. Foresterman gave me. We carried her downstairs.

In the mudroom, I loaded my own .22 and silently handed it to my spouse, Mr. Foresterman.  This was symbolic on my part; letting him know this was my decision and not his fault.

Death by firearm is an accepted, quick and humane way to put down an animal, especially when time and circumstances warrant it. However, it is not easy being the bearer of death for any animal.

We stared at each other briefly without speaking, and I took the box holding Georgy from him.

Carrying her out into the white night, I set the box down in the feathery snow. My goodbyes were swift. I spoke of how much I loved her and thanked her for her love in return. Her eyes were closed now.

Large Snowflakes gently fell on the blanket, on her, on me.  I rubbed her furry little brow just like the way she loves it.

Mr. Foresterman touched my shoulder. It was cold outside, and it was time.  He wanted to wait until I left.

My legs felt heavy as I took the stairs one by one.

Instead of soldiering on like I always do though, I began to cry. My wails were as big and vast as the pain in my heart, so unlike me. Normally I cry in silence, if ever.

This time my tears fell; an ugly cry that should have been years ago. I cried for her, me, Mr. Foresterman - then it became more substantial than I could hold in - my parents, my brother, all those who aren’t here now, all the hurts and pains experienced, the unexplained why’s.  I cried the tears I couldn’t shed before.

But mostly I cried for her, my little friend.

And so in her final moments, the Queen, that little furball,  gave me the gift to feel grief in the present, something I haven't had in a long time.

I never heard the shot. 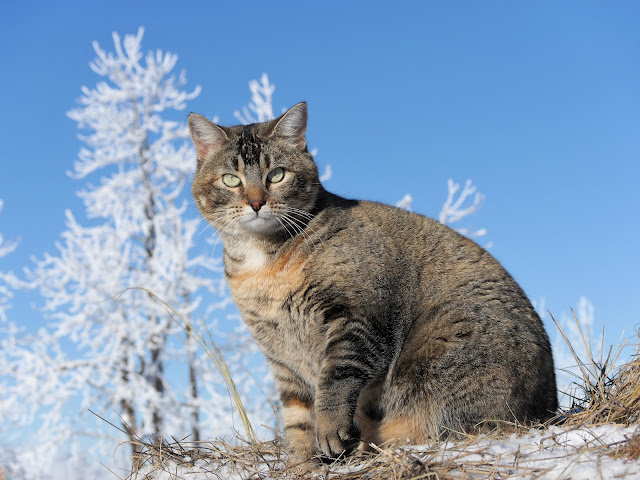