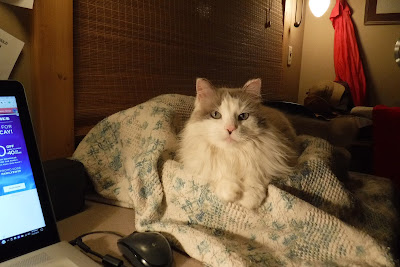 Tomaz the cat has never been one to complain. He was found on the streets as a Tom (unneutered male) in a small Wisconsin town almost ten years ago. He was at a kill shelter when we first met; however, he kept “accidentally” missing the “deadline” (now you know where THAT term comes from) due to his friendly nature. Nobody wants to kill the most friendly cat in the world. And he was friendly. Crafty friendly. So we adopted and neutered him. We thought that would take care of the “crafty” part.
There was something about his attitude (he didn’t try to hurt me) and his size (I was pretty sure he could kill larger than breadbox rodents) that I liked. Ten hour drives back and forth to the house in Montana the first two years we lived together didn’t phase him. His first large adorable but hard to kill chinchilla-looking packrat didn’t phase him. His survival as a wildfire victim, which was documented here, didn’t phase him either. And Isabella the queen cat’s timely death didn’t phase him.  So certainly adopting Georgy, the girly kitty wouldn't phase him- we thought.
But all in all, Tomaz is tough. I love him for his toughness.  You want to part of feral’s family; you have to be tough.
Sometimes that affects communication though.
So last month when I woke up to a warm cat pee soaking and a big cat straddling my hip akin to some foreign fetish film shit, there he was, letting me know in his own special way he had a problem.
Like I said, sometimes you have to do big tough things to get my attention.
This caught my attention.

We set up his sick ward in the bathroom downstairs and proceeded to go through the kitty cat health checklist. He has plenty of water: check. He has a can of moist food along with his top of the line dry food three times a week: check.  The boxes are clean: check.  His stress level:
Well, my stress level sucks at times, but I refuse to take it to the pee fetish level. Maybe the shopping at all costs level, or let’s spa for a week level, but for Tomaz, it's obvious we cannot check off his bodily function stress level.  He is stressed, distressed, needing more attention.  Too bad cats can’t just drink margaritas with you and chill.  Ernest Hemingway might have been onto something, but we will never know, will we, unless I can convince Mr. Foresterman to let me try. But then Tomaz doesn’t have six toes...
I digress.
Always.
So back to Tomaz.  This is a problem.  And it has everything to do with Georgy.
~
part 2 coming up. when i get to it, pfft. 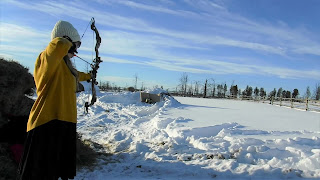