Somehow I ended up working this Summer.  Not that I don't work; I personally know FICA as a frenemy as I do pay SS & Medicare taxes all year long, attempt random paperwork at one am in the morning and legally I really am a Forestry Technician! But we don't work in the Summer mostly due to Motorcycle rallies, heat, and dying from heat. Neither one of us wants to drag the other's body out of the woods. We are off trail you know, miles in, so the word "dragging" is appropriate.

We do have safety meetings daily, remember?

Anyhow, this year was different.

We worked this Summer. 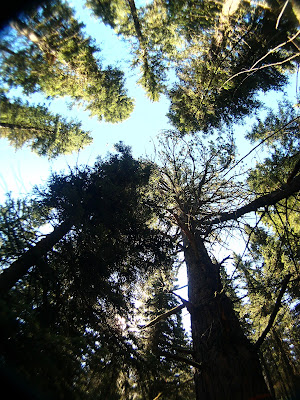 1) I had my 5 year final Cancer scan and lab workup after all of this. AFTER. Just a week ago. My Hematologist Oncologist said it best; "at age 53, if you didn't have a Heart Attack or Stroke while working in the woods, you must be very healthy"  He is right.

So, according to the Timbercruising tests and Cancer clinic's , Im free at last!! Officially cured of Unicentric Castleman's Disease. But now that means I have to lose the chemo weight I have been working on for "just in case". NO MORE ICE CREAM FOR YOOOOU my mind screams while my hands grab. Yes, IT IS hard being me.


2) Because in my world this Summer I did not have cell phone coverage nor wifi, I was on a sabbatical from the outside world. But not from the outside "outside" (dont worry, I know where I am going with this) Anyhow since I was being technologically dried out (versus... well, you know.)  I took what they can only describe as "sh*t-tons" of photos and fun VIDEO with a new little go pro thing- the only thing I could get my hands on that didnt whimper in the woods.

AND YES, I have video of what we exactly do in the woods. Its being audited as we type. BEcause it needs to be. Dont ask. Not now.


3) I actually lived in the woods with the government's permission. Out of a tiny footprint of a travel trailer parked in the middle of nowhere. I have photo proof.  Once the locals ("all 3 of them, but if you count in the tourists...") found out we were working and not squatting ("who are those people who keep swimming at night in an above 6000ft lake?") they were okay with it.  Until we had "dead pet week" and kept asking "uh whose dead pets are these we keep finding in the woods?"  at the local tourist bar.  Not a good conversation starter for someone who looks like they have been living in the woods- I dont recommend making friends this way, because its awfully hard to insert the topic into any conversation. "By the way...." while looking like you might not have seen a washcloth in a while. JUST NOT GOOD. Im sure with the time I spent running hot water in their bathroom sink behind close doors they were probably thinking of calling up 911. "Nope, No, they are just Timber Cruisers, feed them, give them a beer and let them go back to work" the authorities would say, as they were too busy with the naked bikers and touristic traffic down below.

Yep. Timber Cruising is not a walk in the woods, people, its DEDICATION. DEDICATION TO ALL that is holy and unholy and those things you just cant describe but know if you did it could possible get you a free beer or milkshake...


So once my mind gets rest from climbing over acres of downed trees crisscrossed and tangled like a timber cruiser's unbrushed head of hair (why do I know this? ) , scaling talis at a 60 percent angle ("Ooo look at the pretty little rocks that are rolling down... uh-oh"), aging trees while hanging over cliff edges (that one is kinda fun), and most importantly, trying to understand what I was seeing when I peered into that box of fur left in the woods (note: dont.) I plan on posting more soon, if anything, to warn others.