First of all, before you all call me a tease again, Frostig had three dominant Genetic marker series that revealed themselves. His results were not inconclusive.

There, are you satisfied? Heh heh...

Okay fine.  If you don't want to know what I have to say you can look up the results - they are right after the first picture of Frostig, okay?

-But for you goodly patient ones-

Let me explain the Science behind all of this in a feral way!

Up to a certain point, Science had incomplete Databases of Genetic markers for all breeds of horses. So people who might say breed type cannot be revealed in genetic testing aren't exactly wrong. There are still many breeds that have not had their Genetic Markers researched thoroughly to add to the Database.

There has been a great advancement in the last five years of Equine genetics. These techniques are now being used to decipher Breed Genetic Markers in both Wild Horse herds and Breed registries across the world.

The Arabian and Thoroughbred, 2011

Testing Microchrondial DNA is actually easier and more cost effective than blood typing. That is why this type of testing is becoming available for not just Horses, but for people, canines, and other species.

This Science is still in its spawning stages. Hopefully, in the future, they will have all horse breeds genetically identified, and a viable indicator for Breed specific.

I gave Texas A&M permission to use Frostig's Microchrondial DNA for research, as he is an Adobe Town Mustang (Wyoming). Dr. E. Gus Cothran was one of the first to pull breed specific Genetic Markers off of the wild horse herds in the USA for the US government; Texas A&M  has one of the World's largest databases and has worked with governments all over the world in determining Genetics of wild horses.  I trust the Science behind this testing and am very excited to see where Equine Genetic testing is headed in the future.

So are you ready for the results yet? 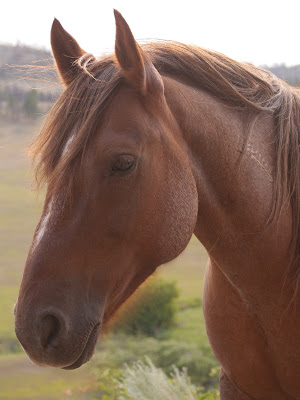 
WOW! Right? He's a Welsh Sporthorse in the making!

So what does this really mean?

Since there was not a breed registry in the USA until 1907 for Welsh ponies (although some were brought over in the 1880's), and Selle Francais didn't have an official American breed registry until the 1990's, those genetic markers are fairly recent for placement in Wyoming where Frostig is from. Morgans have been around since the early 1800's but historically started on the East coast of the USA. Since he has no Spanish related markers (the oldest ones for North America), his ancestors most likely were not wandering around Wyoming 200 years ago. HOWEVER someone else in his herd may have ancestors with these specific genetic markers; but not Frostig.

An interesting note- when researching the breed, "Selle Francais" I also found two others in the USA who tested their Mustang with Texas A&M. Both had "Selle Francais" listed in their Genetic Markers. Coincidentally, these Mustangs were conceived in the Herd Management Areas (HMA) next to Frostig's HMA in Wyoming. With that kind of information, I could conclude there was a Selle Francais purposefully put into that area at some point, and we lucky ones have reaped the genetic benefits :)

Really, though,
It's kind of like winning the Sporthorse lottery;
I have a Mustang Welsh Sporthorse!
yes!


So let's go a little further into the West's equine history, shall we?


Where I live, Montana, there are many historical accounts of people moving out West to take advantage of a marketing opportunity in the late 1800's - early 1900's. It wasn't just Gold that brought people out here.

What was the marketing opportunity?

In World War I (1914-1918) an estimated Six MILLION cavalry horses served in battle. Six Million horses. And of that number, close to a Million USA horses were sent to War overseas. That meant there was a need in the United States to provide "trained" horses to the US and the British government for war.

One Million USA horses. Think about it. That is a lot of horses. Where could you find that large of an amount of horses in such a short time frame?


Well, during the Homestead Act of 1862, not only could you homestead 160 acres in the West to claim free land, there was money to be made rounding up roaming horses on unclaimed lands to train and sell to buyers. Not only is it written in Montana and Wyoming history, we even have photographic evidence.


Evelyn Cameron, a famous early photographer, and her Husband, Ewen, a biologist, both British Aristocrats, specifically arrived at Terry, Montana from England to raise polo ponies during the late 1800's. With her photography skills, she documented the area's surrounding families whose livelihoods depended on training and selling horses for cavalry use, when farming wasn't working out due to drought and poor soil conditions. Her photography for the era is amazing.


And just south of Montana's border, in Wyoming, Oliver Henry Wallop, the son of an English Earl, went into partnership with a Scot named Malcolm Moncrieffe, son of a Baronet. Together they sold over Twenty Thousand horses to the British for the Boer war (1899-1902). But in the meanwhile, they gave back to the horse community, breeding for better horses- and polo ponies.


Then there were the Chappel Brothers from England. They collected and sold over a hundred seventeen thousand horses in the USA to the WWI cause. But when the War was over and the market had dropped, they were left with many horses. With the new fancy gasoline engines taking over for horsepower in Chicago, they decided to take advantage of the situation and open a cannery in Illinois to market a new idea - canned Dog food - Ken-L Rations, using horse meat. But then they needed even more horses. Opening up an Equine collection facility in Miles City, Montana took care of that problem.


So as you can see, there were many that took advantage of these horses in the West during that time period, depleting the numbers roaming the range. But where did all these horses come from in the first place?


Based on Genetic Markers, some Mustangs really do have a Spanish Breed background from when their ancestors were brought over in the 1500's and left behind to multiply in the Americas. But for the majority, as people migrated into the West from the 1700's on, there are historical accounts of new breeds of horses being introduced from nearby ranches and government breeding programs.


In order to save money in a harsh climate, Ranchers would let their horses run in the winter out on the range, the unclaimed land. They would round them up in the Spring for them to go back to work or be sold for profit. Those horses who could not work, or be sold due to age (both young and old), were left out on the range. And the US Government during the wars actually supplemented herds by introducing good stock to increase healthier herds.


So these free-ranging horses multiplied, breaking off into smaller bands. These smaller bands multiplied for the good, though- herd health and genetics count on these naturally selected separations. However, sometimes new "blood" was introduced to breed a taller horse, or a sturdier horse etc., to make sure herds did not become inbred (poor genetics).


This system worked, for the most part, that is until more people began to migrate out West in larger numbers.

When the Homestead Act came about, people homesteaded by claiming rangeland; they captured horses to sell to the British Government first, then both US and British. This depleted the herd numbers. When the WWI was over, these same people ranched, they farmed, they started new businesses that either used wild horses for pet food, some ranch use, rodeo bucking stock... or needed no horses at all.

Then the day came when all land was claimed; the range was now filled.


And the horses left behind that survived all this change? They are still managed today by the Bureau Land Management (BLM) in specifically located HMA's out West according to US government law.

They exist. They are called Mustangs.
And they are the last of the Free horses. 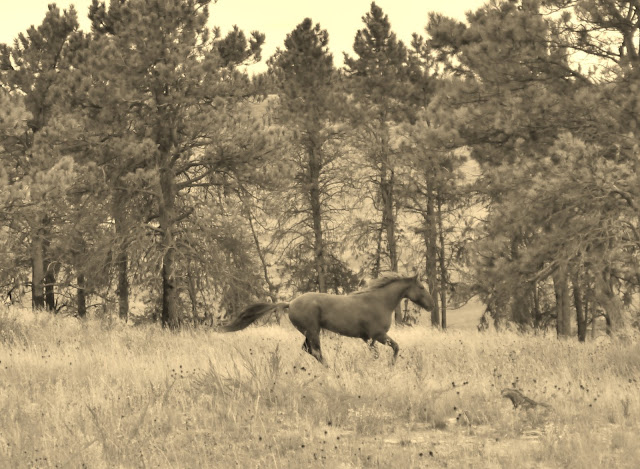 Today, with land a precious commodity, the determination of what species stays and who goes is in a delicate balancing act in the West. As with all things, there is politics involved as Science evolves. It will be interesting to see what the conclusion is when it comes to the future management of Mustangs in the USA.


I will not go further into this discussion because it is a sensitive one; everyone has an opinion, and they should. For me, I do know the final answer should be determined by everyone's actions, not just the government.


I would suggest to those who are able, to consider adopting a Mustang from the BLM. They truly are purposeful horses with some great genetics. The ones who can no longer be in an HMA due to land restraints need a home. Why should we devalue these horses for a system we, us humans, created?


My horse is a Mustang; I am very proud of who he is.

But thank you Science-

because my Frostig is basically a handsome Welsh Sporthorse- 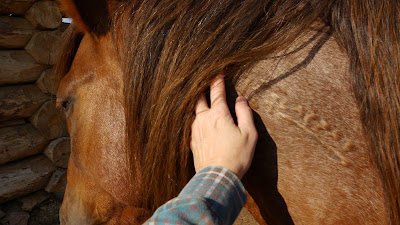 with a badass tattoo.

We have plans, together, me and this boy.

-For references and further reading-


Her life in her own penmanship- diaries-


Horses in the West - Also includes information about selling horses to the British, US Governments for War, Remount Service (many old photos)