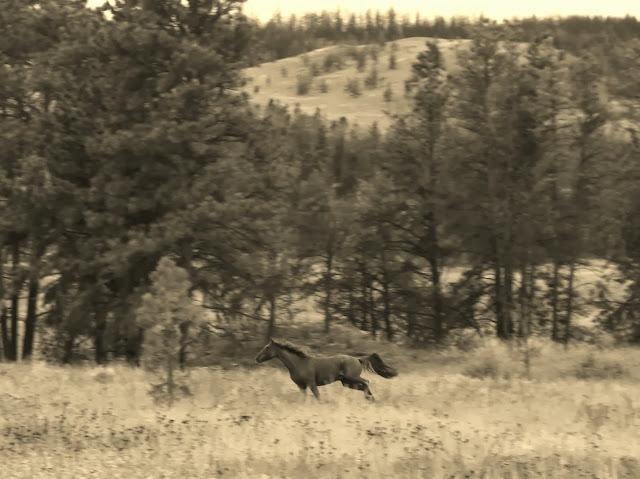 My finger hovers over the mouse;
i right click, again.

an ad for a little red roan mustang
still viable, rideable, still available.
Sitting at my desk at midnight
the crickets chirp their sweet trill of good night
alongside open doors
curtains dance lazily in a night breeze.
i contemplate. 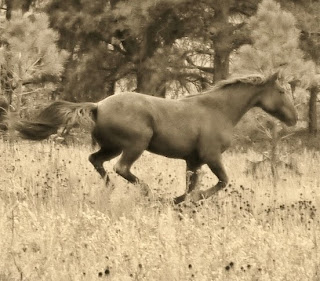 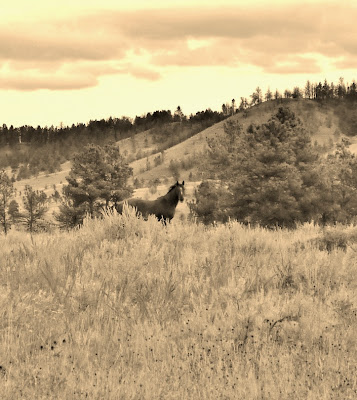 50 years old, three more years of scans
then they can say "remission"
they give me no promises.
50 years old, last year's consuming wildfire
watching from our hayfield below
it left us ashes to rebuild.
50 years old, two beautiful, fierce daughters
living lives fully far away
we taught them how to leave.
50 years old, a forester for a husband
softly snores in the other room
not knowing the little girl
inside the woman
is right clicking
at midnight
again.
there.
I contemplate. 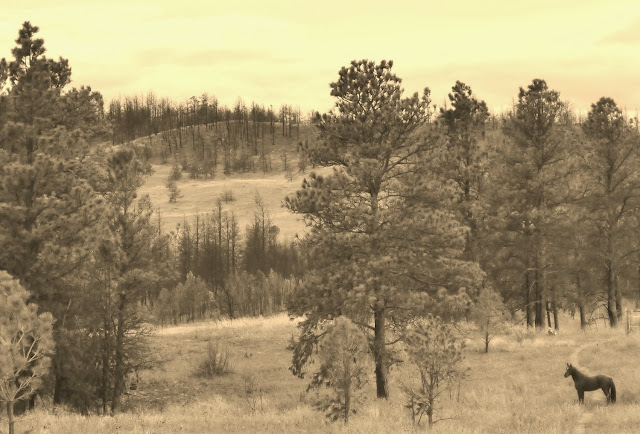 "i can" says strong woman thoughts
I have been through drought,
hard times and loneliness

I have been through fire.

so "i can" says I
because

this girl used to ride for fun 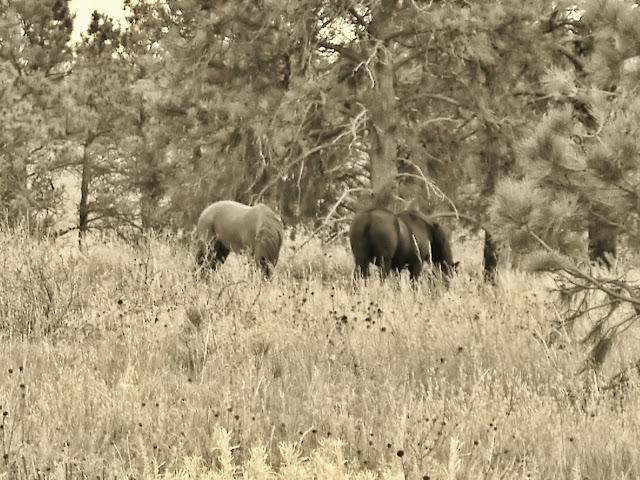 "and they all lived happily ever after"


When I first starting looking for horses to keep Ebony company, Mr. Foresterman and I had a deep discussion about our future - we found out that I couldnt sit comfortable on Ebony due to the DVT damage in my left leg, ankle to groin.  I wear a compression sock on that leg, but when I sat on his broad Morgan back, my leg would go numb.  Either I quit trying, or try to find a suitable riding horse that was small enough for my leg issue, but large enough to carry me.  Ebony was also having issues himself due to the fire and being insulin resistant, but with patience and supplements, he slowly was becoming himself again, and rideable. So now what do we do?  Do we give up on horses, or do we try...?

So yes, at midnight many nights, i would view this certain ad. Each time I would watch the video I was impressed with this little horse's big heart - he moved like a thoroughbred at only 14 hands  - but he was a mustang. In certain horse circles, this is the equivalent of being a mutt, a mixed breed, a muggle horse. I wanted a small, well defined horse, not a pony, and i had looked for quite awhile for the right horse - he so much fit the description that i needed. But he was a mustang...

but then i thought, so am i...and so i would watch the video, read the ad, and many nights ask myself, "Was I capable of being this little horse's partner?"

A mustang is a wild, feral horse - and there are special places out west on US Government land called "herd management areas" (HMA's) where they roam freely by the hundreds...until the government thinks there are too many and they round them up with helicopters and wranglers, bringing them in by the hundreds. This is where Frostig's story begins - in the Adobe Town HMA, in the red desert of south central Wyoming.

He was born in 2004 - in a herd that has been bloodtyped as having lineage of Spanish colonial horses from the 1600's - during the early spring season, when the grounds have thawed out, the first buds appear on the pasque flowers, and the bands of wild horses would have established their routines...his mother would have showed him what was safe to eat, what was safe to drink, and  no man  nor woman would have ever touched him.  His father would have guided them around, making sure they were safe from predators, incoming weather, and other stallions. He would live this way for a whole year, the turning of the seasons hearing no mans voice, just the whinnies, nickers and sighs of his family. Until the roundup of  August - October 2005.

The frightening noise of a large mechanical whirring bird with men inside, driving them apart, together, apart as they scrambled to get away - then mens voices, shouting, riding alongside, forcing them into corrals while brandishing sticks with large plastic bags on the end to frighten... dust, sweat, panic as stallions whirled and pushed and tried to get their families out, some making a vain attempt to leap too tall gates, colts getting trampled, mares getting shoved and bit and the chaos wouldnt end even after they were separated.  Then there is separation; he would be taken away from his family, banded on the neck with a large plastic ziptie marked with what HMA he was from, castrated, and then freezebranded on his neck, harsh enough to scar his skin down to flesh, because he was born a roan... the men must be able to see his brand from afar in the holding pens, where all the other newly branded, castrated yearlings stood, calling out for their family...

Flash forward to 8 years - in one week I met him, then rode him in my english saddle for his first time , where i did not hurt nor go numb, and fell in love with his tempered willingness, and his ability to try - the next week he was trimmed by a farrier in front of us and he was so good - the third week he passed the prepurchase exam with flying colors... and I brought him home that same day after the brand inspector passed him through. But his brand on his neck; his brand was like a secret decoder ring...If we could interpret the code on his neck into numbers, we could call the Government and they would tell us where he was from, when he was adopted, and when he was titled by the adoptee (it takes one year to be an owner when you adopt a wild mustang, after that you can receive title for your horse.  If not, the government takes him back, and he belongs to the US government, where he is either adopted out again, or is put into a permanent holding pen for his lifetime).  So with Mr. Foresterman's help, we shaved over the brand area - it helps to see it better - we each took a turn writing down what markings we saw without showing it to each other, and then we compared; our markings matched.

Going to the Bureau of Land Mangement  (BLM) website online, we deciphered it into numbers. There. Now we can call.

Frostig was one of the lucky ones; because of his unusual markings of a white skunk tail, a socklet on one back hind, and his red roan coat, he was adopted in November 2005 for $125. to someone in Minnesota.  In one year, he was then titled to this same person, who then either kept him, or sold him.  Somewhere he was supposedly trained by the Amish to be a cart horse, and was then sold to a horse trader from Iowa, who then sold him to another horse trader in Wyoming, who we bought him from. From the time of when he was first captured to living with us today, he has lived in four states, and has had at least 5 owners, counting the US Government. We were told he was 10 years old , however his brand told another story - he is only 9 years old.

If he could only speak - he has been through so much in those 9 years...

I brought him home. forever.