Yes, today, April 26, is Arbor day!!
This is a huge holiday in our realm of things, and we celebrate in a very very secret forest-ry way
it involves handshakes, food and dancing,
outside in the dirt on top of pine cones under the biggest tree you can find,
but i cant tell you because its a biiig secret thing...
(i think its called a ...wait for it... a picnic...shhh!)
But I love Arbor day. My fav!!!
And you know what else?

this post is gonna be about those BIG TREES I told you I wanted to see!!!

because IM lika lil' flower in the woods - everyday is Arbor day!!

Anyhow,
in my last post I was talking about how we didnt want to die in Yosemite park on our 4 day holiday to our Nieces wedding near LA.
When we decided to drive from Montana to California,
I told Mr. Foresterman I reallly really want to see big trees,
and he gave in-errr - he decided that was a good idea...
Now, dont get us wrong - we did like certain parts of Yosemite
(the ones we saw in pictures afterwards, later, in a safe zone)
but then some of you were confused on why we would be terrified to drive there- 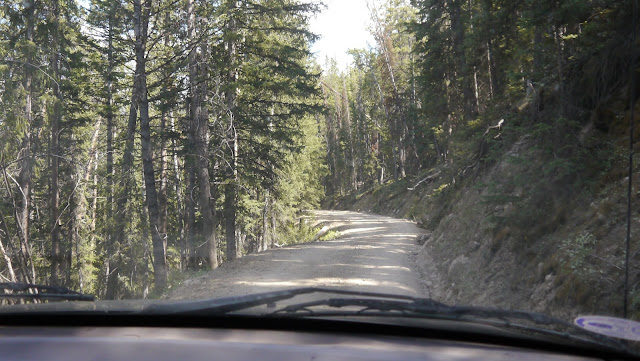 when we drive on steep roads like this one above for work,
without guardrails, blacktop, gravel or two lanes?
But these are the kind of roads we can handle without terror...
why?
because there is no traffic.
NO TERRIFIED WIDE-EYED STRANGER TRYING TO DRIVE THEIR VEHICLE...
ONTO YOUR LAP.
WHILE YOURE IN YOUR VEHICLE.
FREQUENTLY.

yikes!
we still be traumatized!

Moving ON!
When we finally got to the BIGTREES!! grove that the pamphlets said
was less FREQUENTED
by terrified tourists, 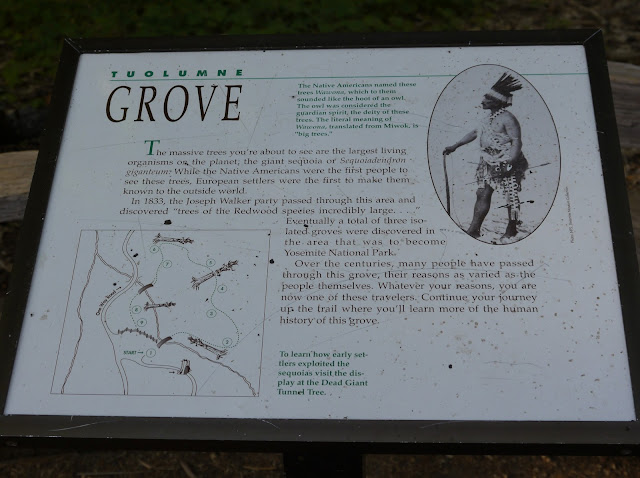 we were pretty excited!
Tuolumne Grove!
And guess what?
NOBODY WAS THERE!
why? 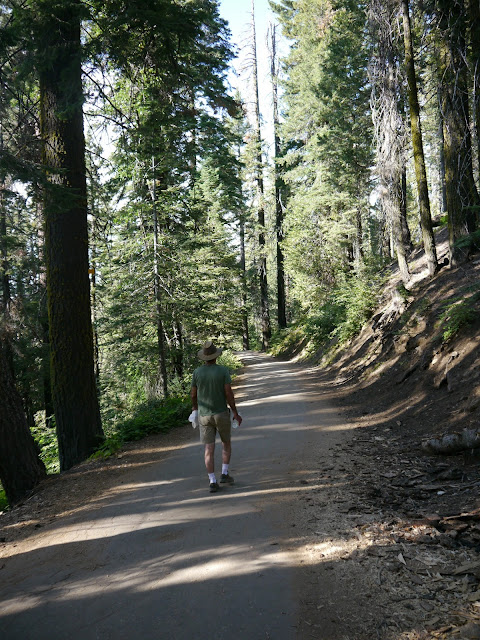 Because the sun was setting!

No one in the their right mind does Yosemite's Tioga Road in 3 hours or less,
near the end of the day!

And so it was pretty much all ours!
but

We wouldnt recommend you do this!!!!
okay?
As we walked further along the trail (okay, trotted)
it was obvious the trees were getting taller and taller as we went downhill
(not figuratively speaking, literally)
but then
we saw our first- 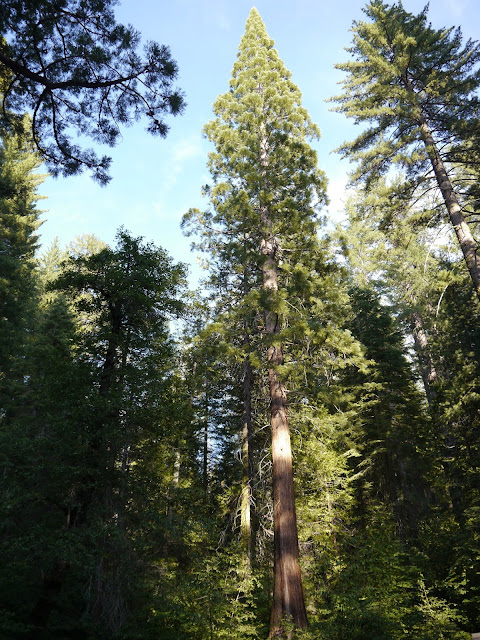 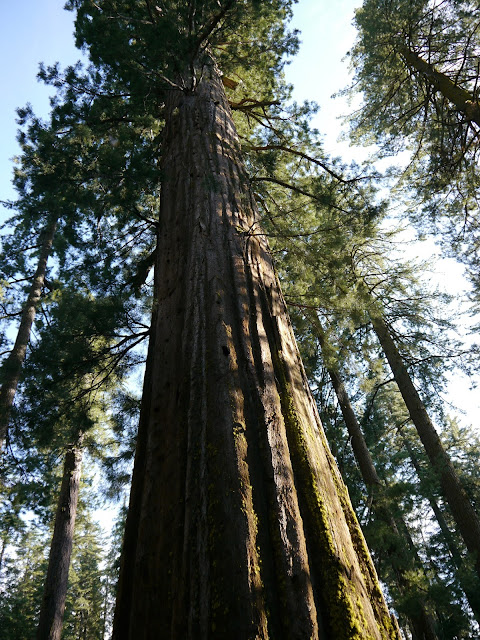 And we approached it silently, staring up.

We were quiet for a few minutes, taking in this wonderful sight,
one that we only have read about in books...
and then,
someone spoke-
This Douglas' squirrel was chewing me out because I walked too close to his pine cone...
He's actually the guardian of the cones...
and
Im pretty sure he influenced someone to put up these~
In order to make sure this old growth forest (just a couple of thousand years old...just)
keeps regenerating itself,
They want anyone who can read that sign
not to touch the cones...
thats the future of Sequoias right there in those poky things! 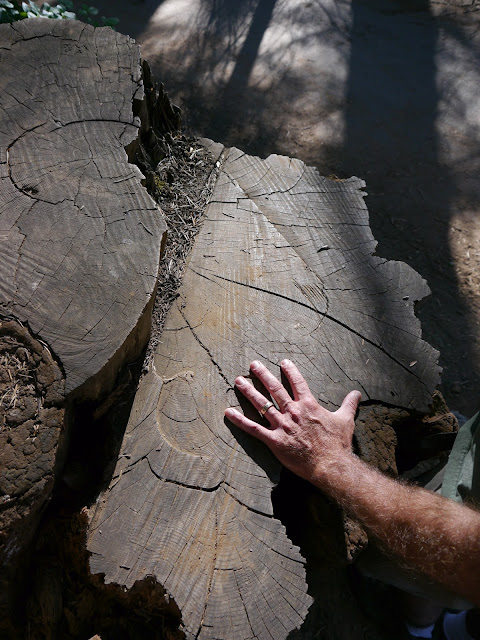 In the past, before Yosemite became a National "treasure",
There was lots of logging going on.
Considering that most of the trees there are 1000-3000 years old,
its kind of sad that they were cut down for fun :(
Theres a reminder of this in this  grove-
they took a large stump, cut a hole,
and charged tourists to drive their buggies,
- later cars -
right through it...
but you cant do that now.
So once I got the hang of the timer on my camera... 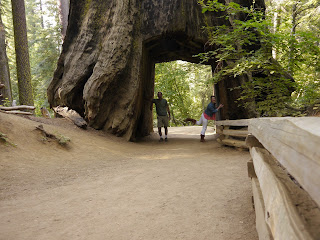 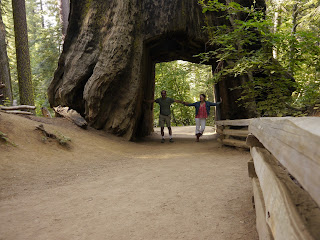 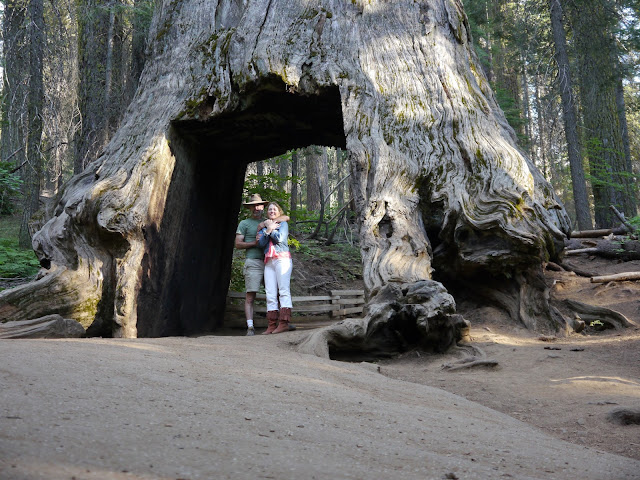 we did become tourists and took some touristy pictures... 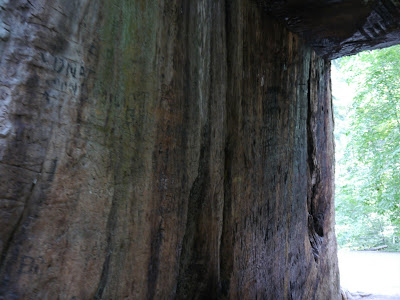 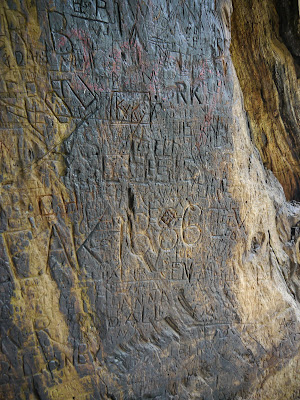 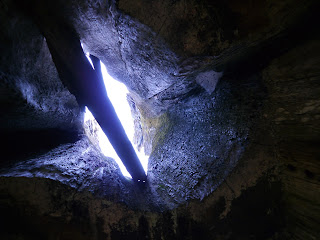 It was odd - the inside of this stump was almost just as interesting as the outside though!
but it was the large alive trees that really caught our attention... 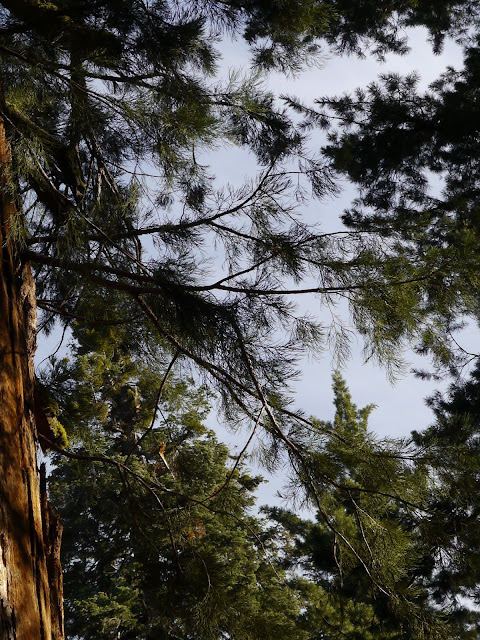 The branches had beautiful fronding... 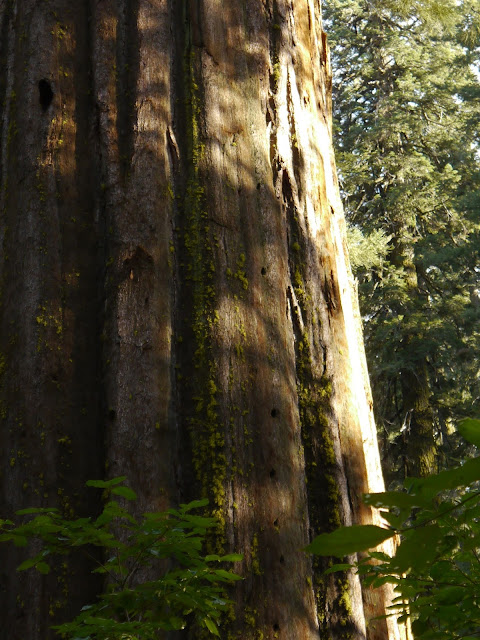 and the bark was amazing... 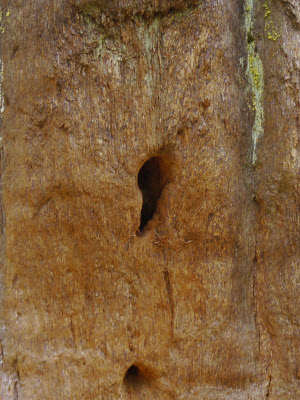 It even had areas of wildlife holes that didnt seem to affect the tree...
So I will never forget my first big trees... 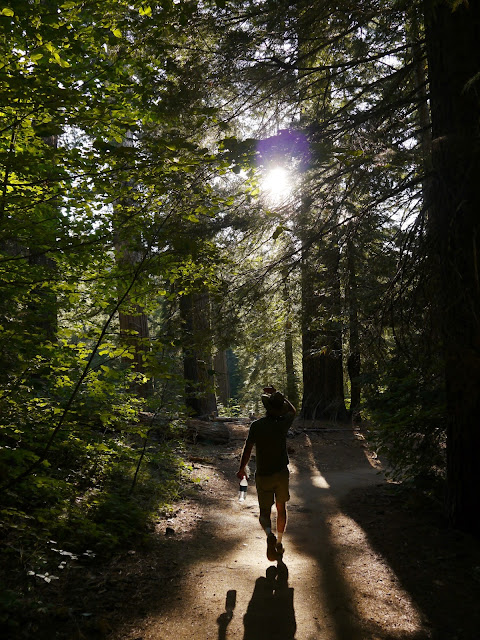