after being held captive by the massive snowstorm that shut down South Dakotas interstate last weekend - we finally made it back home Tuesday night this week - a weeks trip for our annual forestry meeting turned into ten perpetual days of being totally unarmed as i didnt bring a camera, nor my own laptop.
I am scarred for life now and will never do that again.

And because,
well, i have no pictures to accompany this report/post.

I really am feral when it comes to writing skills so if I have some pictures to distract you momentarily from my writing disability its all good...right?

Though in this post, its probably a good thing in this case we dont have photos.

Really, our trip was mainly uneventful, unlike last time.

well...unless you count this minor incident...

It all started on the first day of the trip - being the tough little cookies we are, we tried to drive over a million miles so we could have time to look at a hay baler on the Iowa/Minnesota border on the way to the meeting in the time constraint we were following.
because we are like that.
For me, im always trying to cram 50 things into one day because otherwise we feel we are not worthy to live, due to my being taught by Nuns; Catholic guilt is an art not to be taken lightly.  However since Mr. Foresterman was only a CCD kid and not a "fulltime Catholic" growing up, he likes to do lots of things in one trip because he says  "its  practical"... what a heathen. Because i was raised properly by nuns to feel guilty whereas Mr. Foresterman went to a PUBLIC school and was a CCD kid,  when it comes to purgatory time I am pretty sure he will be stuck there longer since I know more fulltime Catholics who will pray me out; yes, its a mysterious religion and I learned at an early age not to ask questions,
why do you ask?

anyways, back to the report -

I was drowsily awoken in the dark jeep to a "hmm, what did i do?" comment from the typically humble Mr. Foresterman, and the annoyingly flashing blue white lights drew closer as our little  patriot pulled over to the side in a town i wasnt aware of we were in as i had been snoozing on and off since we left South Dakota.

I should mention that Mr. Foresterman has the impeccable timing of getting pulled over when we least expect it. It is usually in Minnesota. And it is like they know he was born in Wisconsin and is a perpetual Packer fan who does not belong in the land of the Vikings. and this they can tell all of this by his driving; it is modeled after years and years of dodging deer. Wisconsin has a huge suicidal and homicidal deer population. From over 40 years of deer induced PSTD driving experience in the woods, when night falls Mr. Foresterman flinches at shadows and will slow down at reflectors that mimic animal eyes in the dark; windy nights make him more alert then a golden retriever in wildlife sanctuary that is in the season of migration.  And someday he might even tell you of the story of the buck who tapdanced on his hood at 50 mph, after he had hit another deer in the other direction...that story however is a little too fresh in his mind so we dont bring it up often. Especially not when hes driving.

And so here we are, after driving many many hours on the road.

"tap-tap"
I jumped as the Trooper was on my side of things, tapping on the passenger window with his flashlight, then flashing it in my eyes.  Squinting like a weary drugged raccoon, I rolled down the window, and we peered at each other -
he breaks the silence with a "hello, how are you folks doing tonight?",
his eyes shifting back and forth between the two of us in the jeep.

And of course,  this is where I have been told frequently in my lifetime that sometimes I just shouldnt speak the first thing that I think of. I tend to ignore that comment though because sometimes Luck is on my side....

"We're looking for a motel right now! " I blurt out.

he looks at me.

His flashlight swings up and down where im sitting.

it was then i realized
that
my selection of clothing for long distance travel
might have not been the most appropriate for this moment;
i was wearing a short little jumper with a tight black sweater underneath. black tights and cute little black boots. and "smeared by sleep" makeup. No coat. A poor timbercruisers attempt to keep a Deer induced PSTD driver from focusing on imminent driving death all the time.

AND
unfortunately
I may have looked like every inch the rumpled 50 year old hooker
who may have or might not have just gotten lucky with a swerving, slow driving lonely older man.

A rumpled 50 year old hooker who just blurted out she is looking for a quick motel.

so of course the first thing i think of is

"uh-oh. this isnt looking good; i gotta make this better"

" I am NOT A HOOKER IM A TIMBER CRUISER AND HES NOT DRUNK!"

He knows me well.

He really is quick on the draw.

Reaching over and taking the license, the trooper shined his flashlight on it and said,

"do you know why I pulled you over?"

but again before I could save the day and say

" I am NOT A HOOKER IM A TIMBER CRUISER AND HES NOT DRUNK!"

wisely Mr. Foresterman spoke up,
"well, I know I was going below the speed limit because of deer this time of night"

The trooper shined his flashlight on Mr. Foresterman.

"you also swerved when you saw me flick on my overhead lights".

"UH yes! I know!" Mr. Foresterman blurted out, covering my intentions.
"the deer are really out this time of year and I have a tendency of being on the lookout for  everything"

it was that then the most unlikely hero appeared

the one who saved us

the one who saved us from having to do the walk/talk test of shame.

During all of this we forgot one thing

Dexterdog sat up in the backseat and yawned.

-you could almost see it -

gliding slowly towards the open window to the where the Trooper had leaned in.

Mr. Foresterman and I involuntarily held our breath.

The Trooper leaned back.

"thats Dexter, he travels with us all the time"
I said, squeezing out those words while still holding my breath.

The Trooper spoke to Dexterdog.

"Sorry Dexter to wake you up, but you have a stink about you.
I have a 90 lb Lab and I cant even imagine going on a 50 mile trip with him."

Mr. Foresterman and I finally exhaled.

We ended up getting a written warning to be careful
(of what? swerving or slowing down when we think theres imaginary deer? Of impersonating a 50 year old Minnesota Hooker?  Mr. Foresterman wouldnt let me call them up to ask. How can i feel Catholic guilt without knowing what we looked like we might have did but didnt???)

And the Trooper was the nicest guy afterwards, really...

So it was our Dexterdog who saved the day.

Who would think that Dexterdog, who wasnt allowed at the  annual Forestry meeting because of that "not being human" issue but we still brought him along anyway,
would save our reputation?

What a Great Co-Worker! 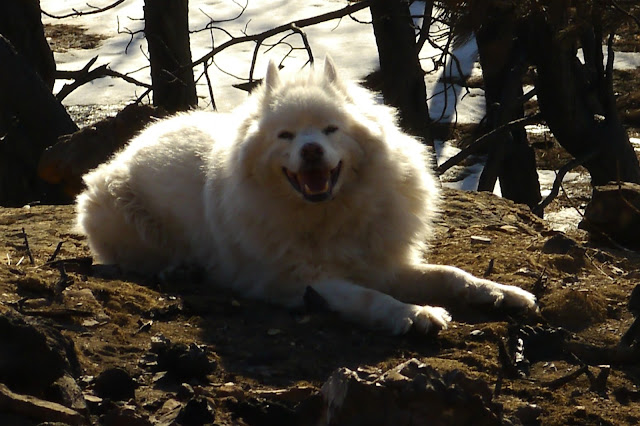 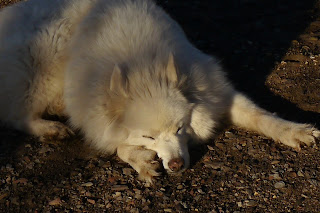 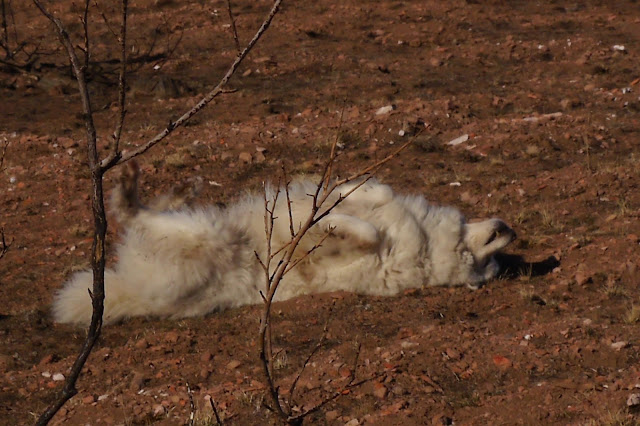 Joining up with Deborah Jeans Friday Blog hop,
because,
although this post was not really about Farming,

and
we are not out to intentionally scar people,

we still want to add our Forestry perspective to farming...

because these things really happen to us.