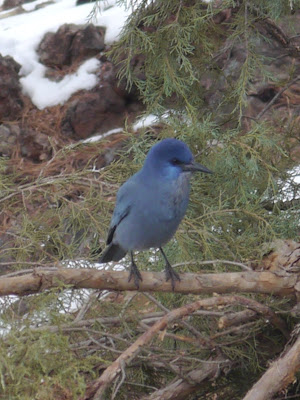 This is a Pinon Jay - they are a special species of concern.
Yes, they look like giant bluebirds, and that is exactly how Mr. Foresterman described them to me
as i lay in bed under the warm fluffy covers
Self-employed, self-hours, limited internet until after midnight leads to sleeping in
with Catholic school child guilt - can I do this?  is this legal? I wonder, as I roll back on my stomach....
Anyhow, standing in the doorway I could hear him shuffle his slippers.
loudly.
then
"uhmm, theres these huge blue birds by your feeder"
Mind you, I didnt believe him at first because for one whole solid month
we only had two chickadee birds show up to this new bird feeding hobby of mine.
In fact i left a comment on the spectacular bird lady of Texas's blog site
"The Run*Around*Ranch Report"
me complaining about this exact issue-
i thought since she is a bird goddess down there who beckons the wee ones
she might put in a good word with them for me.
She did.
in flocks.
uhmm.
Anyhow,
back in Wisconsin the bears would rip out anything that remotely looked
like a healthy snack bar wrapped in hard plastic housing...
so we never had a bird feeder...
until now. 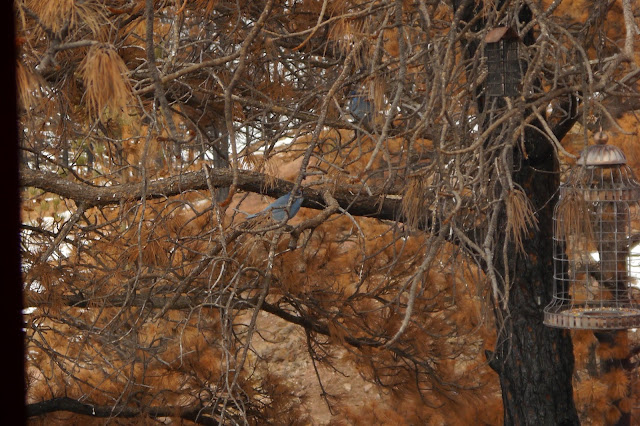 and we still dont.
yes, dont adjust the color on your screen - that is what my trees look like - dead.
Actually about 65 acres worth of Ponderosa Pines.
And that fancy bird feeder if you notice does not have a feeder inside of it.
it melted.
But I still throw out seed,
hoping beyond hope that something out here lives to show some color...
besides me.
*ahem* 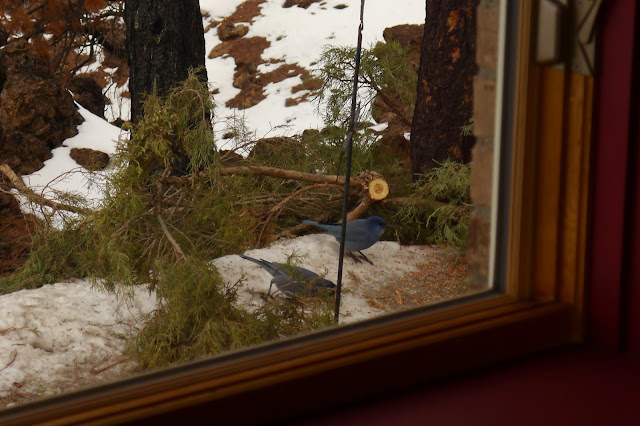 And then these guys show up; the blue bird refugee of wildfire.
"The Pinon Jay"
(however not entirely unrelated to "blue birds of happiness" or their cousins "blue birds of discontent")
BTW thats my christmas tree - its green and I can use it for color outside!
yay!
But nows I got blue!
errr, yay!?
As you can tell these poor refugee birds are really flighty about having their picture taken.
I had to stalk them otherwise they kept flying away
or
it could have been that I didnt change out of my fuzzy spotted poopy robe yet
and they thought I was a big demented cat that was going to eat them...
(yes, i meant poofy but it came out poopy - the word stays)
anyhow 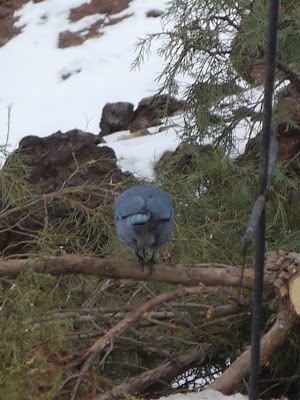 This is how they eat their seeds; they tuck them between their toes
and crack them open;
isnt it cute?
Im sure other birds do this too, but this is just so cute to see birds lined up snapping their toes..
I tried this with pistachios once.
it hurt.
They are so much better at it!
Anyhow, back to their plight  - the only place they can find any food are at bird feeders now! 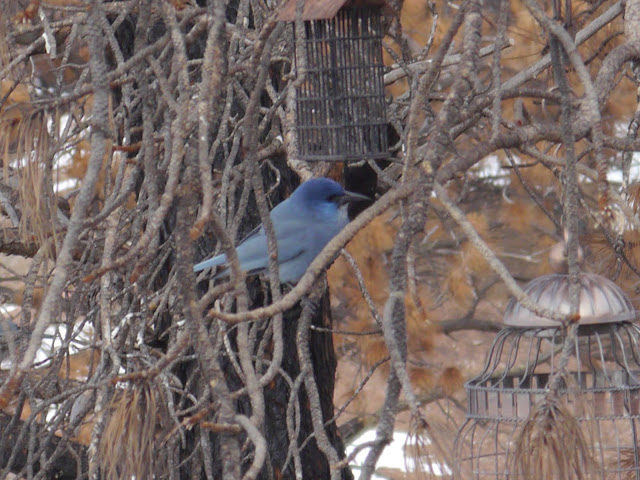 well, except for mine.  The ground is good, right?
Basically,
I am now feeling responsible for feeding 10+ homeless Pinon Jays.
And I heard they have flocks of them IN THE HUNDREDS
*"fainting, im fainting, catch m-" thud*
otherwise in my Catholic School Girl Guilty mind I think I will be considered a very poor bird hostess.
What would Gidget say????
This is all my fault.
Yes, I had two chickadees and i wished for more colorful birds.
You couldnt write this stuff- wait...?
Thats right - these special birds of concern with a very limited year around US Western range only eat pine nuts, unless they are totally  absolutely desperate and on their last seed, in which they will forego their dignity and show up at my house. repeatedly, with no sense of shame even though they are monogamous (although Im pretty sure Mrs. P Jay was chewing out Mr. P Jay for choosing to live in a bad neighborhood, and "now we have to resort to THIS" *as she waves her little bird wing around...*).
Im a bird feeder neophyte, dont they know that???
Take pity, Birds!
Did you know they usually storehouse their main food source, pine nuts,
so they can eat them later during the winter, like squirrels
(holla to TexWisGirl, except if she also curses me with squirrels... :S )
This is why in the forests you see little stands of baby pine trees sometimes
(technical feral forestry term "baby"; sometimes used with Latin)
You can thank the Pinon Jay for planting trees!
But not this year. 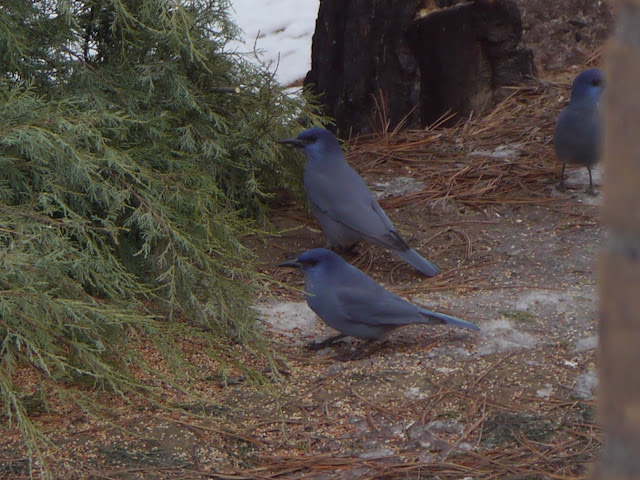 During this years Drought, and largest Wildfire ever on record in Montana,
~ just like our firewood pile that burned up in one pretty huge spectacular blaze~
their storehoused food piles burned up.
and their tree homes. 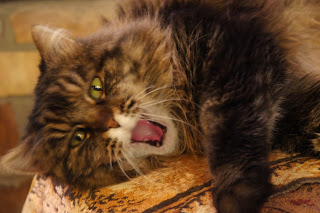 "speak for yourself, poopy robed lady"
Okay,
except for SOME of us....
If you would like, please read more here about the interesting life and plight of Pinon Jays ~
Cornell Lab of Ornithology - Pinon Jays
excuse me, I have to go throw more bird seed now...
~