this fire is not done yet. 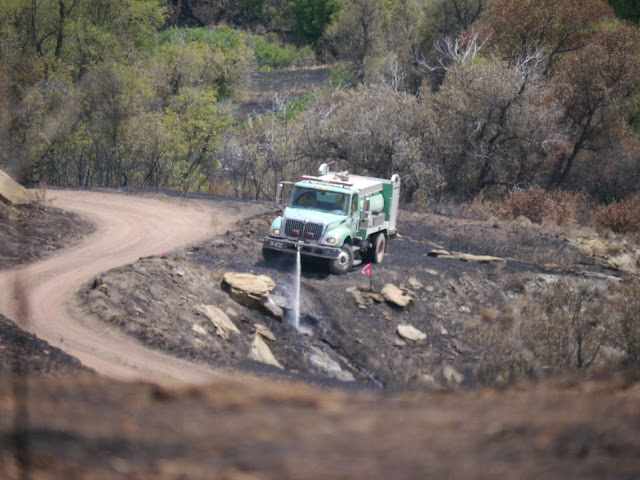 This is our own personal coal seam fire, east of the house. lucky us.
We havent tried to put this one out, because these are dangerous when water is applied.
Thats why the firefighters are sitting in the cab. They said they would stop spraying if the wind switches towards the house.
Lucky for us it didnt.

A coal seam fire happens when "brown" coal (lower substrate under the ground) catches on fire and starts to burn underground. It can burn for years if not caught in its early stages. And thats not good because it can flare up when things start to grow again, starting another wildfire. They say you can tell a coal seam fire by the heat it gives off from the ground, or by a nearby white ash opening in the rocks. The gas it produces when water hits is noxious, and basically can suffocate living things, so they usually start by trying to dig it out to expose the coal - then apply water from a distance/protected area to finish it off.  In a few days they will come out and check it again to make sure it is out.

How dangerous are these?

July 14, 2012 6:30 pm  •  Associated Press
GREAT FALLS  – Seven firefighters working the Taylor Creek Fire received medical treatment after trying to mop up a hot spot that turned out to be a surface coal seam.  Officials say the firefighters on Friday suffered nausea due to exposure to sulfur dioxide and were taken to the Ashland Clinic where they were treated and released, returning to duty the same day.  The Taylor Creek Fire is part of the Southeastern Montana Complex that on Saturday had consumed about 508 square miles.

So im not sure what we have done to anger it,

but im
pretty sure

SE Montana is now trying to kill us...