We are at the ugly hard part of the burn process
~ all parts are now sloughing off, weeping, bleeding, and his nerve endings in his pads are coming alive~
we spent a good portion last night/early morning grooming him the way his mama would with a clean wet washcloth.

he purred.
he even let me clean his belly.

Its hard to see him shudder in pain. We are giving him Tramadol at 50 mg, no more then once a day. Cats have issues with pain relievers as it affects their liver in a different way. Their liver cant shed pain meds the way humans can so they can build up toxic levels, enough to kill them. Its somewhat a dance - giving him just enough so he doesnt go in shock, but not enough to kill him. Hes also on amoxicillin to prevent infection - its mixed in a jar of baby food - turkey in turkey gravy.
he still has his appetite.
tomez will never lose his appetite. 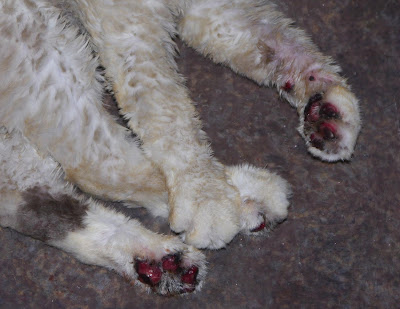 All four of his poor feet look like little raw hamburgers. we are leaving them unbandaged so that they can weep and build up their own scabs. we spray vetericyn on in liberal amounts even though the stuff is pricey, and then we gently pat triple antiboitic cream on, but soon it weeps off and he starts to clean them again.

we'll do it again.

But I tell him all the time that soon enough he will be running and chasing the big bunnies again. He loves to chase bunnies.
I tell him I think hes still my handsome hunter boy. 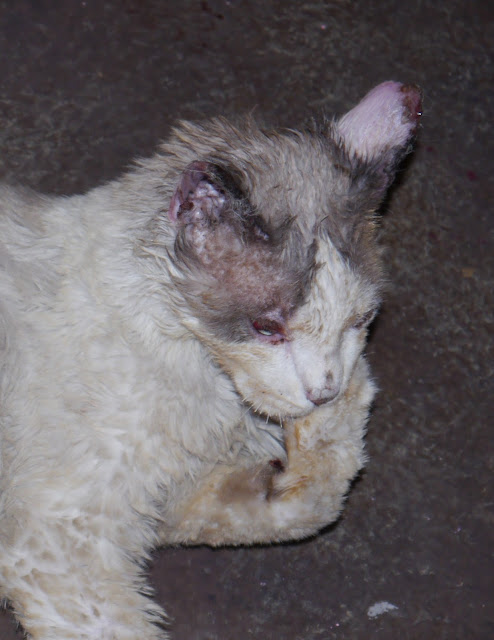 He is also going to lose part of his ears.

But he will still be my beautiful boy.

he will always be my beautiful boy.