I definitely need to confess something to you guys, but lets just say for now that involves me being cleared by a doctor to drive solo across Montana,  St. Patricks Day and a dance hall, different sorts of green liquid, you lowering your standards about me, and these two ~ 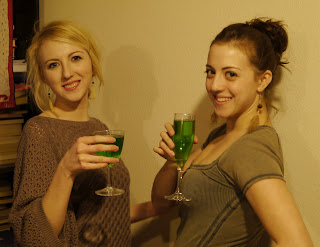 Ahem.  Sometimes discretion really is advised...
So until I confess up shall we move on to... 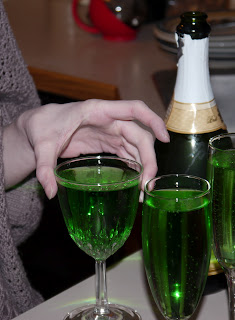 Nooo.
We are done with that.
Believe you me we are soo done with that.
!
lets move on to ~ MORE WEDDING STUFF ~ yay!
*cough*
When shopping with the Bride to be (the one with the side eye cheeky grin up above) in Missoula, we found this really cool gift wrap paper that had her colors and feathers on it for $2.99 at TJ Maxx - we both went "OOOOooo." But then we looked at each other and wondered, "what to do with it?"
I bought it anyway. Im like that at times. 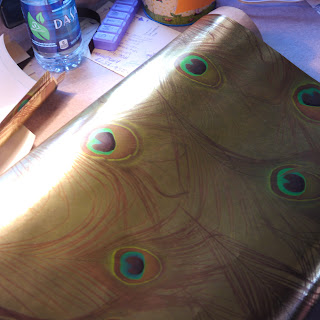 Okay, all the time.
I even bought the two rolls of all they had because for $2.99 I can afford those kind of costly mistakes. But this time it wasnt a mistake!! No!!! It wasnt!!!
we did gooood!! 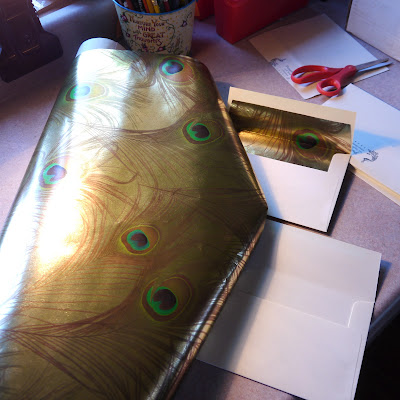 Because when her wedding invites finally came in,
I decided I was going to cut out and make 150 wedding envelope liners to go with them!
At Midnight!
Yes, i know, Me!
Me, the one who uses good scissors to cut out wedding stuff then forgets that I just used them to cut out burrs on Dexterdog, to cut a wire that was poking out of the truck seat ( im still  not sure what it was for) and then of course what all people use the good scissors for but to snip off the growing green poky things on those onions I  forgot about in the pantry. Oh, and add in the cutting of that fringe on the rug I keep cursing and tripping on.
Really, theres no such thing as good scissors in my house.
Scissors are never the same after Im done with them.
I buy scissors in bulk.
I digress.
Lets get back to feral craftiness! 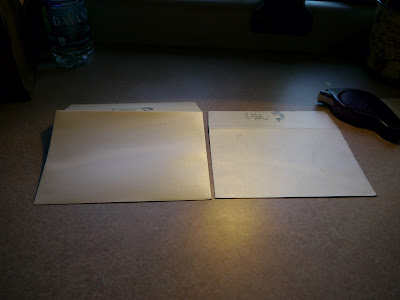 So after I washed the scissors thoroughly, I made a liner template of the envelope that the Invites were going into. I took an envelope that I had accidentally return address-stamped upside down (dont ask) and I then cut off the sticky strip on top of the envelope, tapered it to follow the sides, and cut it just a little bit shorter then the envelope itself. I then looked for thick piece of cardboard to glue the liner template on, but because I got sidetracked and got hungry and made myself a braunschweiger-on- ritzcrackers pile and grabbed a bottle of water then smelled something funny and it wasnt the liver sausage so I  cleaned out the cat box but then saw that the laundry hadnt been sorted but as I was sorting I then saw this shiny clear piece of hard plastic on a paper package in the to-burn pile for tomorrow that would be perfect to stick the liner template on...I did wash my hands inbetween if thats what you were thinking... 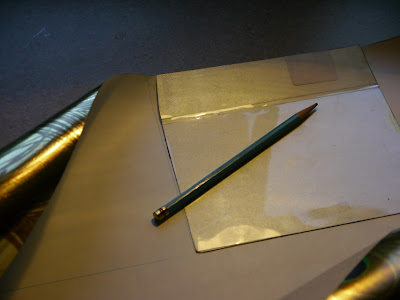 Anyhow it worked perfectly! I flipped the gift wrap paper over, traced the outline of the liner template numerous time (lets count to 150!) and then used the good clean scissors to cut them out! 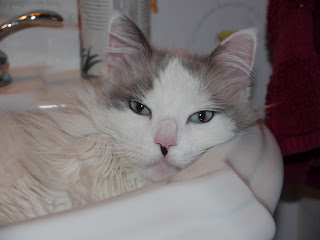 Tomez still wouldnt budge out of the sink during all of this.
I had to use the laundry sink to wash my hands.
Lazy cat.
Sheesh.
Anyway, here comes my favorite part ~ I got me a dotto sticky dispenser! It has to be the most entertaining piece of crafty fun after 12 midnight for someone like me ~ especially when you try put in a new refill!
I became a human Lint  Roller!!
My fingers made me become spideywoman!
I  looked like one of those little green frogs that wanders in and hides under the frig
and when you finally get him out he's covered with dusty bunnies and you have to rinse him off!
It is so worth every penny for the entertainment alone. 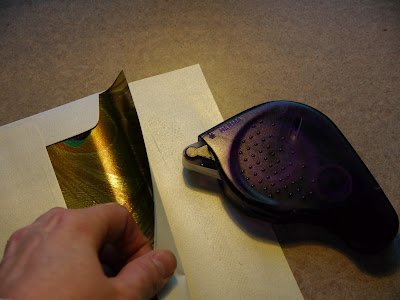 SO after I washed my hands twice, maybe three times,  I inserted the cut-out liner into the envelope, dotto'ed my way across the inside flap near the top of the envelope... 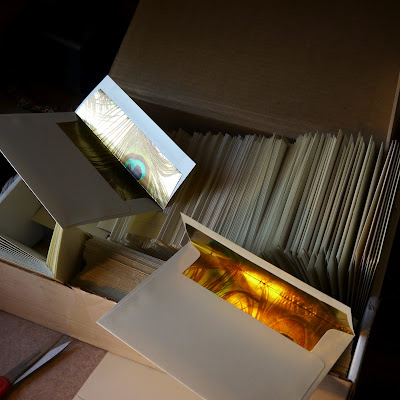 And counted only 148 more to go!
What fun!
Wait until you see the finished Wedding Invite~
its so worth all this hand-washing...
really
!
~
Labels: Feral Fun SE Montana