Remember that bathroom ? The one that even if I had five different forms of chronic illnesses, my bladder was punctured by an Ibis in a freak accident, and my family deserted me because I was just, well * bad luck *   you still would all say, "pfffft yeah, but did you see her bathroom? She could die happy in THAT bathroom..."..
Yep, that one. Anyhow, the other bathroom we have downstairs is getting just a tad bit jealous...and kind of demanded that it get airtime too.  How do I know this? Because I got hit in the head by a birch branch today in this bathroom...yes, we have large birch branches in this bathroom, and I havent exactly figured on where I was going to put them, so I put them next to the toilet tank.  ouch.  kind of whack up call...
When we bought this house, this bathroom was painted a mint green.  And all it had was this tiny little window... It was dark, big enough but mint green narrow, and had all the fixtures in each corner of the room, far away from each other...it just felt like you were going into a potting shed, looking for that special pot, and then wanting to get out as soon as you could before the spiders came to visit...Sorry i lost my train of thought there for a moment. must be the whack up call...Anyhow -
I really dont have anything against the color "mint green" - I especially love it with chocolate. Mint green and chocolate is good, really good, like good with ice cream good. in large quantities.  But when looking for colors to run through this house to bring all the rooms together in a cohesive grouping (yes, I watched HGTV for 6 hours straight at the motel while it rained in the woods for work and picked up lots of lingo. Poor Mr. Foresterman.  Pray for him.) I picked the true colors that we see frequently here in the landscape of South Eastern Montana - "calf scours brown" and  "red dirt gumbo" ... although normal folks would call it "breadbasket" from the Pittsburgh Paints American Spirit home collection , and "deeply red" from Dutch Boy Dimensions.  We have used red on the trim, and the brown on the walls, and it really makes the windows "pop" (yep, more HGTV lingo, cant stop) , visually bringing the outdoors in (6 hours straight of HGTV), and using these colors primarily downstairs with dashes of it here and there upstairs (I sat on the remote) has made a continual unobtrusive peaceful flow throughout the house (pray for him. really.).
So anyway, I kind of decorated it like a potting shed.  And yes, HGTV has nothing on me when it comes to "themes"...its my feral decorating coming out, and since I live out in the middle of no where, I have the ability to get away with this.  Maybe we should total it to 6 chronic illnesses...
Heres the pictures ~ 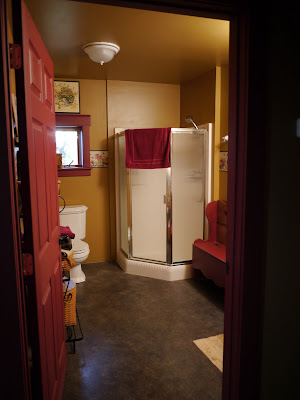 Welcome to the potting shed aka downstairs bathroom! 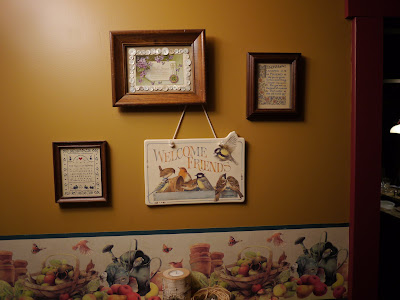 We said WELCOME darn it!
these are sweet gifts from friends over the years - they make a nice collection! I like my friends! and this proves to others that I am liked too.  not that I have slow self esteem in that regard...but look, theres 4 friend based items! and only three of them came from one person! WELCOME! 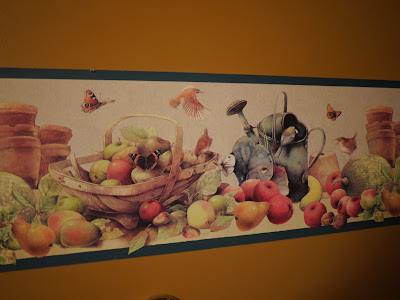 The border is an old one I bought long ago but never used for the house in Wisconsin  - its a Marjorie Bastin print - probably at least 15 years old! I may seem like a hoarder of wallpaper, but in this case intervention was not needed... 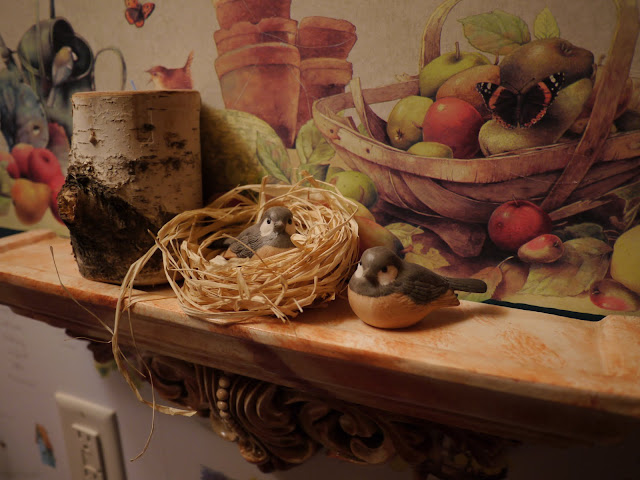 these birds remind me daily of my blog buddy friend Texwisgirl at http://run-a-roundranch.blogspot.com/ shes takes great photos of many birds, even flesh eating chickadees...its a good thing! She has a wicked sense of humor too - Wisconsin girls are like that ;) 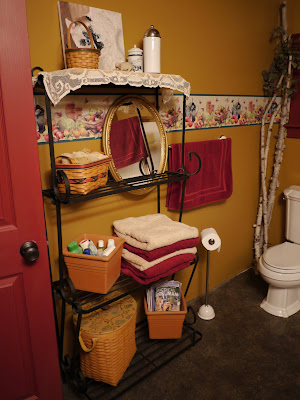 Anyhow, since its a potting shed it needs a planter rack and POTS too!
Maybe i took the theme thing a little too far, but this rack really is sturdy and handy
for a room that has no cabinets whatsoever. 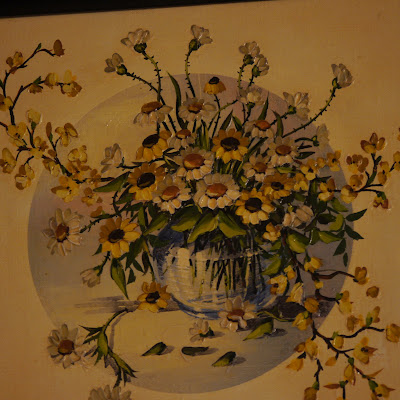 This is one of my favorite oils, and I hung it up above the little window. i think  its because it might draw the eye away from the fact that its one heck of a tiny window, but Im not sure. Maybe 6 more straight hours of HGTV would clear that thought up...
And this painting was done by my oldest when in high school - its her kitty, Mui Mui, 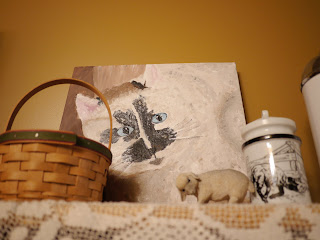 other wise known as evil Muesette.
Shes special, in that special evil cat way that only Siamese mixes can be...
Unfortunately Siamese mixes live forever so she will outlast us all.  We will be eating pounce treats only and sleeping 20 out of 24 hours of the day mandatory  when she takes over the world. 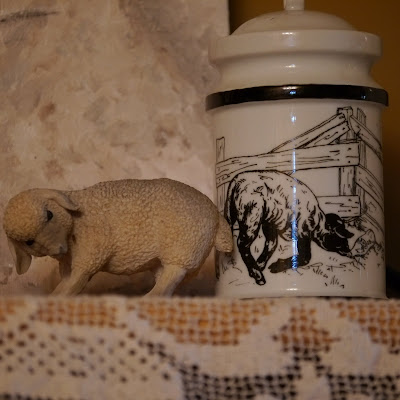 These sheep remind me of the crazy sheep lady at http://myfavoritesheep.blogspot.com/ (its okay, she likes to be called that, really.) She has a baby lamb called Lila who has now determined my retirement years -
I want to be a sheeplady who collects bottle lambs in her old age.
And of course, my other blogging photo buddy, Stacie at http://www.vintagewestphoto.com/
whose not only a neighbor in these parts, but her photos rock and have baaaaaa attitude!
Its sheep mania, yay! 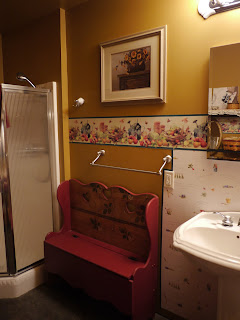 In a potting shed you always need a potting bench.
This one is narrow and I havent hit my knees on it yet.
Yet. 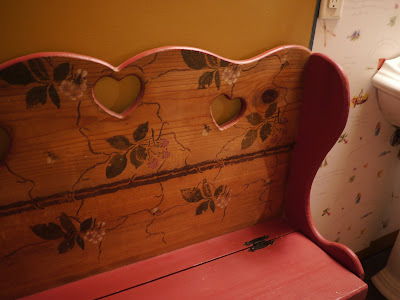 This potting bench has bees stenciled on - this is like a technically difficult 4 layer stencil and I did this when i was young and carefree and could stay up beyond midnight doing a million decorating ideas with no repercussions. sigh. 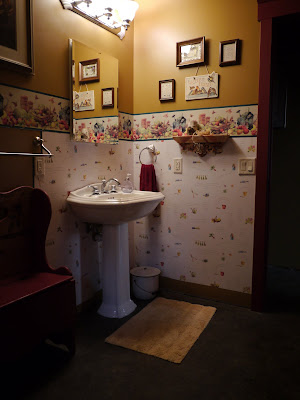 I found this wallpaper in a clearance bin, only one roll. It was enough to highlight around the pedestal sink, making it seem like its not just stuck in a corner, but highlighted it in a good way. And once the painted baseboards go up, it will even be more highlighted! Its Happy now. And highlighted.
Cant you tell by its glowing fixtures? 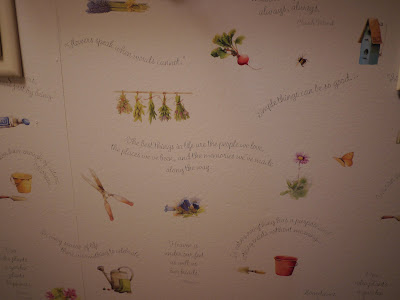 The sayings on this wallpaper make me reflective happy, unless im in the medicine cabinet looking for ibuprofren.  Then i kind of sneer at its happiness...but when the drugs kick in I go back and apologize.
You can take the girl out of the Catholic church but you cant take the Catholic guilt out of the girl.
Unless you bribe with chocolate.  And mint green. And hours upon hours of corruptible HGTV. 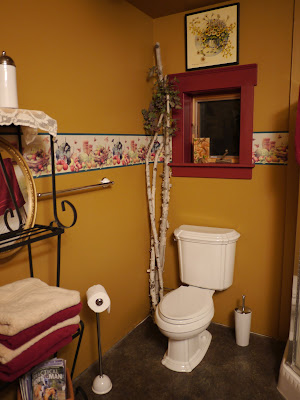 and finally, heres the birch branches...
yes i know, but where do i put them?
And so thats it.  Since I like to feel im at a retreat when at home, and since im in the woods a lot, I thought I would bring some birch branches into the mix for this jealous bathroom...hang them somewhere or something .Maybe you can tell me what i should do with them.
Mr. Foresterman already has.
~
Farm Girl Friday at http://www.deborahjeansdandelionhouse.com/
You rock, dandelion woman!
~
Labels: Farm Friend Friday SE Montana