Tomorrow we're back in the woods and will be working/camping out for the next five days.
No Internet, no cell phone. Just me, Mr. Foresterman, and Dexterdog...and 100% Deet.
We'll take photos as usual to show you what we see!
That is, if the Deet doesnt cloud our judgement...
Anyhow,
lets talk about something completely different! 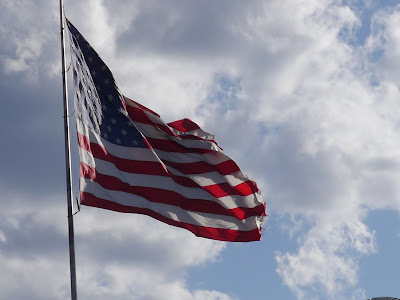 It was a stinkin' windy second day in Missoula; it was GRIZ graduation time at University of Montana,
and we were there to capture the moments of our youngest Daughters's Fiancee Chris's Graduation!!
phew, that was a long run on sentence!
Gotta git me some mooore edj-u-ca-jion to make better ones...
Anyhow,
it was held in their stadium in the mountains , and It was BIG! 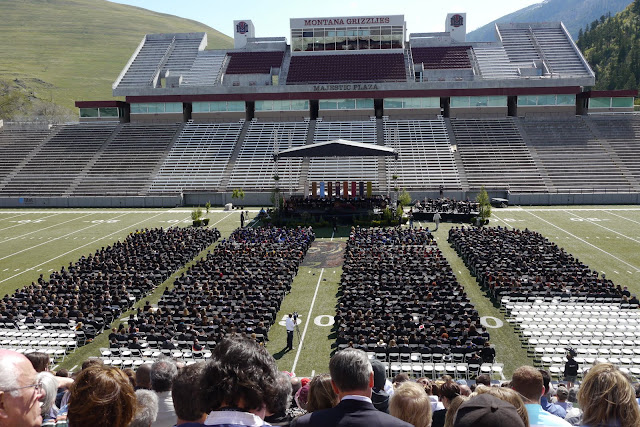 SO BIG that they call it - MAJESTIC Plaza!
Doesnt that sound like one of those super malls where you can get a haircut, new 1980's clothes,
and your airbrushed nails done in one of those high lethal acetone suffocation salons
all in a matter of 3 hours or less?
Anyhow, this event was waaay better!
And prettier! 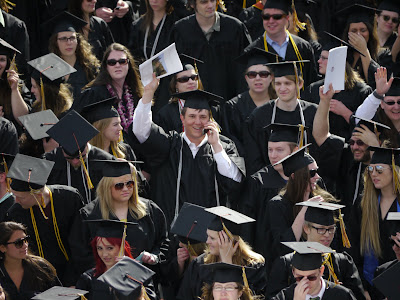 This is Chris, trying to help us see him... 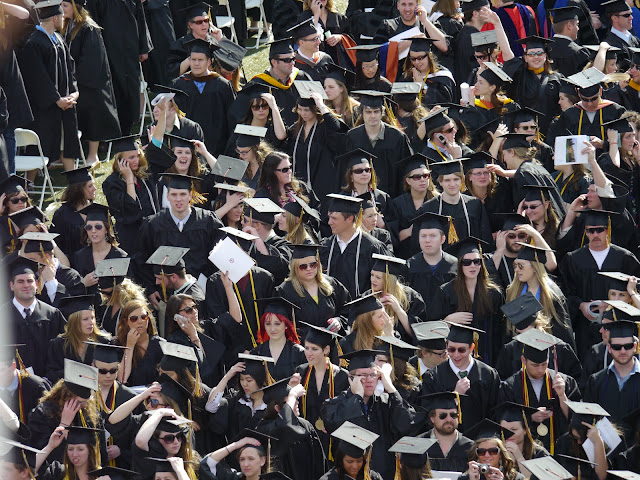 Now try again - do you see him? 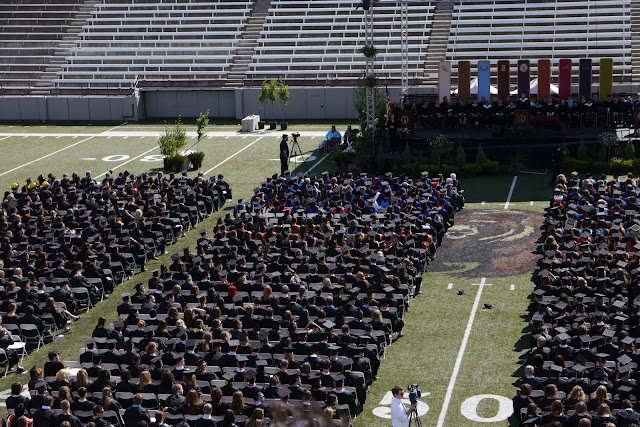 Can you see him here?
Basically it was all like trying to find "wheres Chris?" while facing the sun and wind and sitting on concrete, and my eyes were near the tearing/bleeding/whimpery stage at one point, but darn it, we did get the shot! 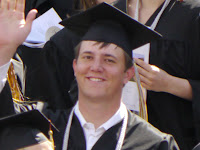 Here he is again - see that silver cord?  He graduated with honors, with a major in both Biology and Philosophy...now he's totally qualified to write run-on sentences with that edj-u-ca-jion. But since hes continuing on to become a  Physical Therapist, it doesnt matter - everyone knows that in the medical field youre suppose to have undecipherable handwriting.... We're proud of you Chris! 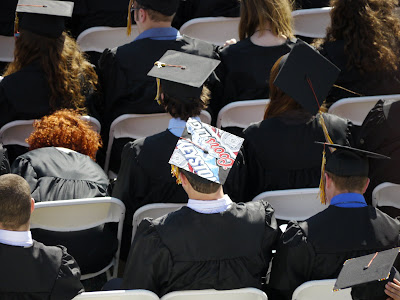 Of course with my short attention span, I soon lost sight of Chris, and started photographing other peoples kids,
who obviously were graduating with a major in Business with emphasis on marketing - 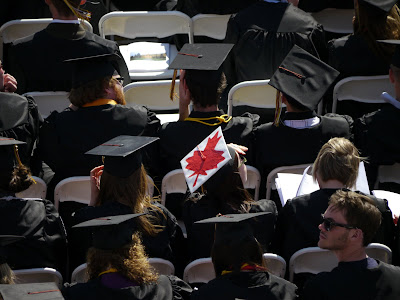 or with a major in International relations - 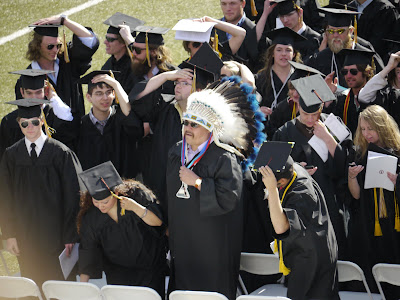 along with an emphasis in cultural studies - 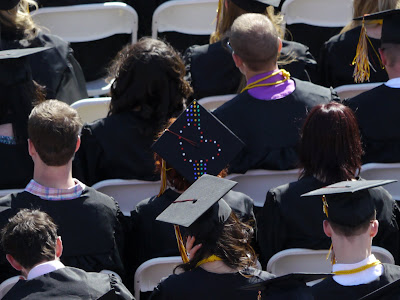 or a Major in Art with a minor in "bedazzling' - 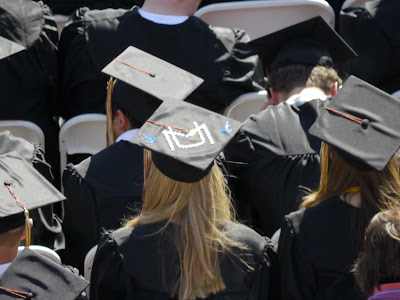 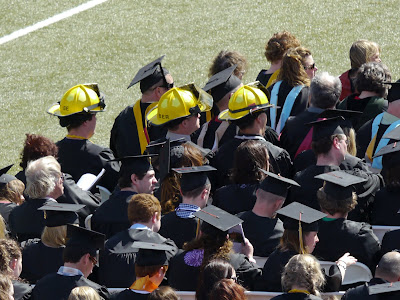 and these guys either are
a) volunteers who put out a forest fire & made it back in time to graduate
or
b) are now certified Fire Science Engineers... 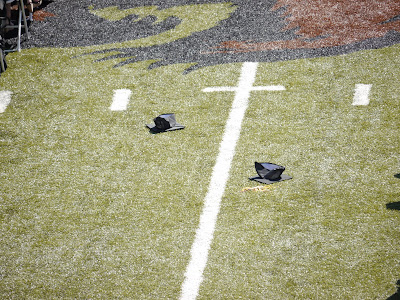 Anyway, it was a very windy day and a lot of caps were flying waay before their time!
Tom Brokaw  spoke too.  I almost forgot about that part!
This was his intro on his commencement speech...it wasnt filmed very well,
but I blame sitting on concrete with the sun and wind in my tearing/bleeding/whimpering eyes
& my short attention span on that.
Anyhow, it was alll good.... 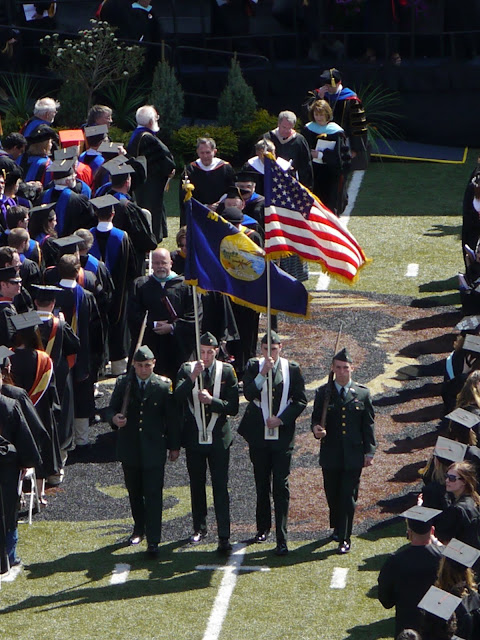 Then it was time to go !
In order for Chris to actually RECEIVE his diploma that wasnt a diploma but an empty diploma folder as they made a promise to him that his actual Diploma WAS IN THE MAIL (real life education, right there in the works, folks)
we needed to go inside to one of their many gyms and watch him walk the walk -
it was like perpetual graduation day!  Yay Chris! 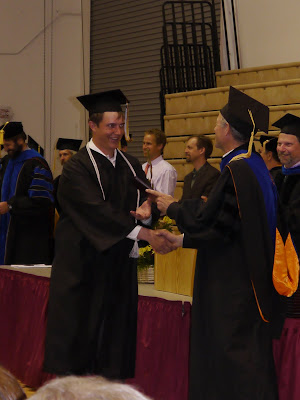 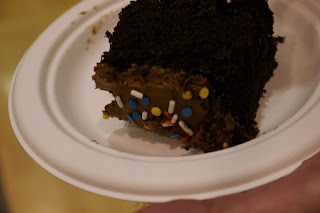 YAY CAKE!!
and that is how Chris got graduated on our second day in Missoula...
stay tuned for more field/forestry shots,
and more Missoula days!
~