Okay, I always am upfront and no hidden novel here, sooo ~
this post is not for the squeamish and has nothing to do with wedding dresses,
pretty sunsets or flowery flowers, and  I apologize in advance.
~But feral is as feral does~
please stop reading RIGHT NOW if you are squeamish.
I mean it!
RIGHT NOW!
Alrighty then,
lets move on !
For the rest of you tough cookies, heres the story behind the story...we came home late Wednesday night from timber cruising in the Black Hills, after tussling with poison ivy, bulls and ball bearings.  We came home for a much needed rest and of course to do some recreational blogging to self-medicate too... and to take a little walk yesterday afternoon in Baby and Sally's horse pasture to assess the weed situation after all the rains we have been receiving in Southeastern Montana... Unfortunately theres poison ivy, poison hemlock and leaf spurge running amok in small areas, waving their little green fronds at us, goading us, taunting... We are determined to win the battle though and plan to shut them down with 2 4 D  - pulling chemical warfare in a subversive organic way on them - a little organic chemistry joke there folks heh heh!  Laugh with us all you organic chemists out there in blog land! HAHAHeeheeHAHAHAHAheeheeHAHAHAahahahahaaa-sigh!!!! Anyhow,  unfortunately it keeps on raining though and so they continue to goad while they can. But we WILL have the last laugh...I digress...
So while we were contemplating this fact,  we find this guy.
A Prairie Rattlesnake.
80 yards from the house.
Mr. Foresterman was so kind enough to go into the house and get my Ruger .22 and snake shot, and his Marlin .22, while I kept an eye on this guy - but this part was sad really, as he was trying so hard to move away to the nearby rocks in slow motion, scale by scale, hoping I wouldnt see him...hoping I would sing my little " I love this place!!" la lee la song as usual and move on in my happy, stomping way. But as you and Richard Simmons can tell, he was obviously fattened up with field mice, and really didnt mean any instant harm - a good thing.  But  80 yards from the house and in with the horses- now thats certainly a bad thing. And since Martha Stewart knows what determines good things, I dont think she would argue with me on this one - so I can speak with authority  - it was a REALLY BAD THING.
Since I was using snake shot I needed to be close; no further then 10 feet at the most.  Mr. Foresterman was my backup, but my first shot seemed to do the trick. We cut the head off with a long shovel, and I buried it deep right there on the spot - even snake heads removed from their snake bodies have been known to still have the instinct to protect themselves, and will bite at whatever is placed in front of them. In fact even as i was holding his headless chubby body, he was still squirming and rattling... 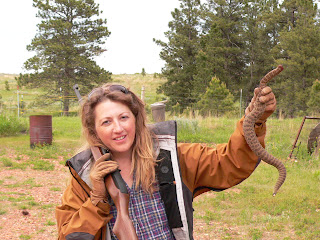 "Hey you, the squeamish one in the corner!!!
Why are you still here?
STOP READING RIGHT NOW - we mean it!!!
Click on one of my blogging friends blog links in the side column!
Right now before you have nightmares about my clothing attire and non brushed hair!!!
NOW!"
Okay then.
Moving on,
He had 7 rows of "buttons" on his rattle, so he was older then a yearling. 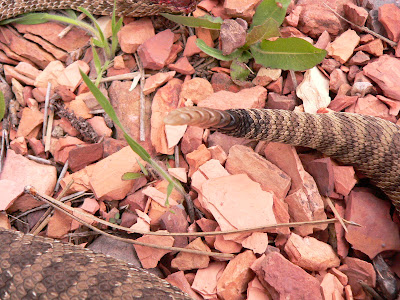 If they call snakes that.
I have a somewhat tendency to describe everything - even child-rearing - in horse terms, so im not sure about that part... dont quote me. And as a side note, dont scar your children this way either.   Unfortunately I would initiate strange looks from pediatricians and teachers over the years while using horse terms and definitions to describe my childrens behavior... then I would frantically backtrack using plain english, talking slow, turning deep shades of dusty mauve followed up by a stammered "not quite myself today" as my closing statement. However it was the latter in the end that would elicit a puzzled but grateful look, and an agreeing nod from them, relieved that they wouldnt have to consider calling child protective services after all.  In fact Im pretty sure I am not the only one who is surprised that I actually am a mother... Im thinking my daughters are now too...Anyhow -
Here you can see the rattles close up, and the beautiful patterning on the skin... 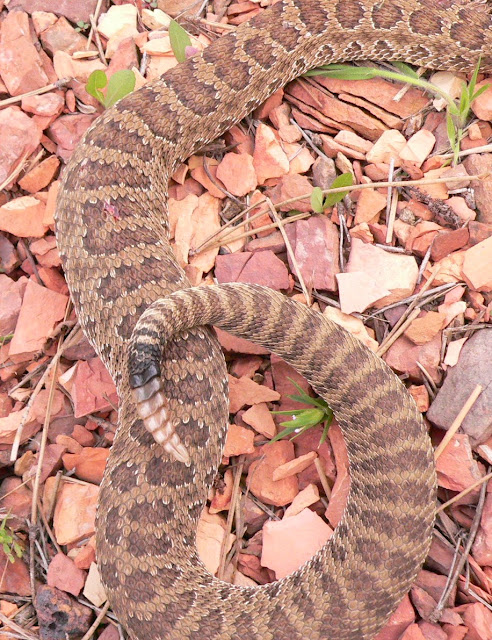 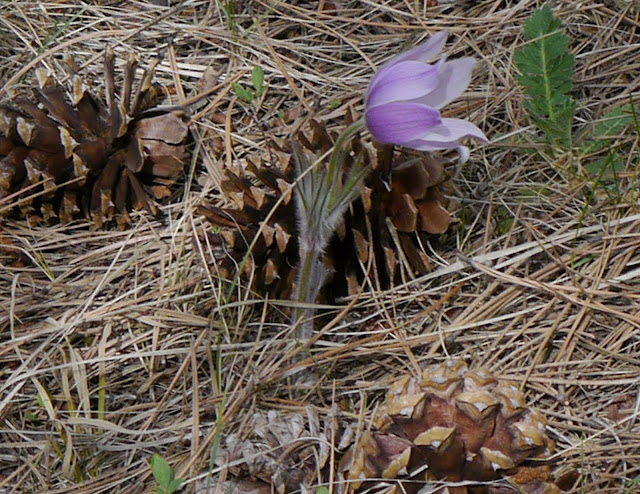 Can you see the similarity in the pattern and the color?  Last year, when I saw the Rattlers in the Black Hills, they were more greenish and actually reminded me of the lichen moss that grows on the rocks there. I wonder if their habitat determines their coloring? Something to look into ! In my free time! Sure! But after a nap...
Tomez wanted to get up close to look too, but obviously theres a natural instinct to
NOT TOUCH this untouchable for all of us! Right Tomez? 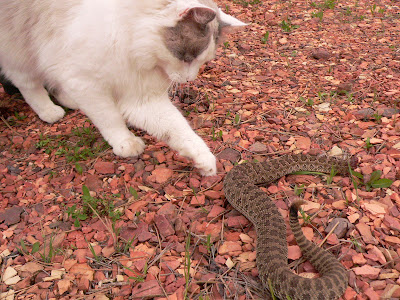 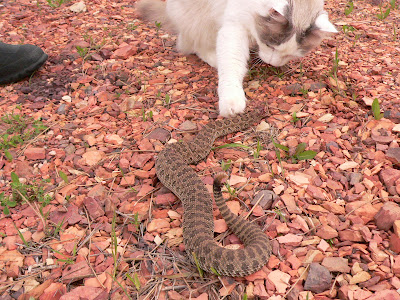 but hey, Im pretty sure I could fit this through my kitty door...
~
Some would make a belt, some would cut off the rattles,
but we decided in the end that placing it on a rock
for the Red-tailed  hawks and their babies
would be a fitting way of disposal... 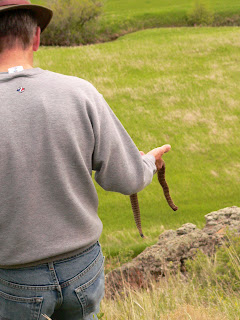 and be a warning to the others
not to get so close to the HOUSE! 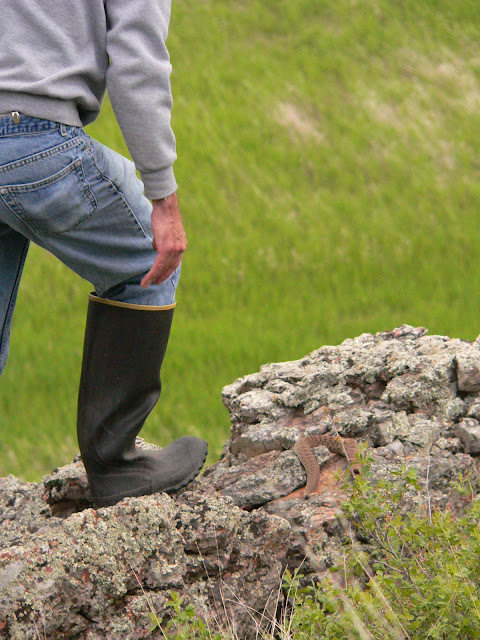 ~
Okay, off to bed so i can "self- medicate" blog tomorrow to show you what we have seen in the woods, and to catch up on everyone elses blogs! Unless something else pops up....I think Im going to check under the bed now....
Good night, friends!
~
Labels: SE Montana WILD animal issues