Definitely the Christmas of Fireplace Inserts and Paybacks...Olympic sized

We soon found out this early winter that the open Fireplace here in SE Montana was an expensive feature in more ways then one  ~  we may as well have lit up $10 bills and used them for heat, or fired up 200 non-generic cu$hy paper towel roll$ in those multipacks for heat, or those little  ...well you get the idea.  Basically, the warm air that we heated in other ways was going up that big chimney hole instead!  And although the entire first floor of our house has in-floor heating and works well, once the sun goes down it takes a while for it to heat up for the evening, esp. for Montana windy winters. Time for solutions, problem solving, "OW my brain hurts can I have chocolate now?" type of thinking...!
We had a Temp Cast Masonry heater in the WI house - and it worked well, so why not buy a fireplace insert that has somewhat the same concept?  Since we work in Forestry, we know where and how to get wood, and so feeding it would be no problem.  We searched for inserts and found that the Avalon Olympic series was not only large enough ("olympic" sized even!) to fit but it also had a nice cooking ledge where you could boil water, warm up food, melt crayons etc. (not really - the crayon part, I mean.  Thats my inner 12 yr old in me coming out). It certainly would make the difference by having a fire in the late afternoon to warm up the house,  and since there was an energy tax credit available for both Montana and the Federal Government,  that just sweetened the pot.  Only thing is that it expired at the end of the year!  So we needed to have it put in pronto...like guess why I havent posted in a while and why we now have warm fingers to do so??
But really, first we had to get the opening ready for this behemoth insert.  OLYMPIC sized even. So off with the OLD! Ring in the NEW!  The original hearthstone wouldnt work - the thickness ranged from 2 inches to a 1 1/4  from end to end,  it was made of a super soft sandstone, and had a nasty swayback that would make any old broodmare feel less guilty about not doing those kegel exercises after colt #6...
This is what the fireplace hearthstone originally looked like
We used a hammer and a rock chisel to pop off the concrete joints - it was kind of fun, actually.  Like wiggling that loose tooth when you were 7 and you wouldnt let anybody help you so you worked really hard on it and then it came off in school and the kids were all amazed at your bloody mouth and started to get wild and Sister Mary Therese got all pale, looking like she was gonna pass out, telling you to go to the washroom NOW and then ..oops  TMI.  Anyhow, we needed to remove this in order to make a sturdy level surface for handling the weight of the insert.  Which by the way is close to 455 lbs! Yikes! OLYMPIC sized!

Moving on, we of course had to make this next step probably a little more super fun and cool
then it needed to be and that of course involved a tarp tent, a fire extinguisher and a dry vac.
Who wouldnt have fun with that kind of stuff, really? 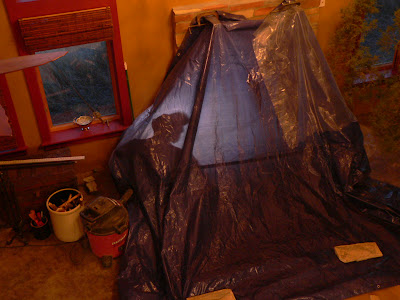 But this tent did serve a purpose; so that the person inside inhaled large amounts of  stone dust while the person outside remained unscathed and took pictures.   We put up a tent in order to get the messy work done - cutting the stone ledge so it would have a level surface to place the new hearthstone on.  And we got some really great shots that made Mr. Foresterman look like he's working in the "deep dark Mines of Moira".  Thats a gifty nerd phrase for all you LOTR fans - you know who you are!

Did you know you could cut rocks with a circular saw & masonry blade?
And use a Skil Saw & masonry blade? And a stone chisel with 2lb hammer?
And whatever else you can find after those wear down?
But your arms do ache.  OLYMPIC sized...from what I heard. 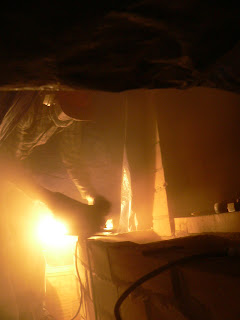 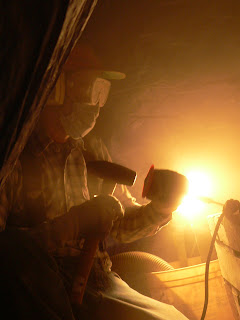 After we got everyone out and using oxygen, we then decided to do something memorable.
Once in awhile we like to read about history.  Or make history.  This is one of the latter times...
In our time capsule were pictures, toys, coins, a 1999 farmers almanac, old report cards and other little trinkets that our girls put in the year of 1999.  When we moved, we decided that this 1999 time capsule would be better entombed in the Montana house then in the house in WI...plus we didnt want the people who bought our house to think we were whack.  So this way its hidden in a fireplace tomb and no one will know until a million years from now!  Well, I guess some will know...okay we all know,  and we all know we are whack, but darn it every family should have a time capsule!! 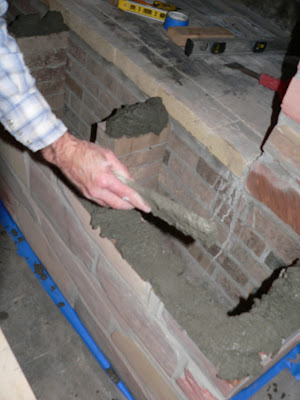 After we had our time capsule ceremony which involved me putting it in while no one was looking, it was time for the concrete to go on to adhere a 250 lb stone  - which looked like fun - OLYMPIC sized fun of course!  Mr. Foresterman said it was so much fun that I should try it.  But of course I politely said no thank you as I didnt want to take the fun away from him.  And I had the camera.
Us time capsule History makers are like that- must remain neutral in all circumstances...
We went to a  Granite & Marble store in Billings that cut this piece of Minnesota Limestone for us -it weighed over 250 lbs!    More then OLYMPIC sized!   This time though I had to put down the camera, because ~ 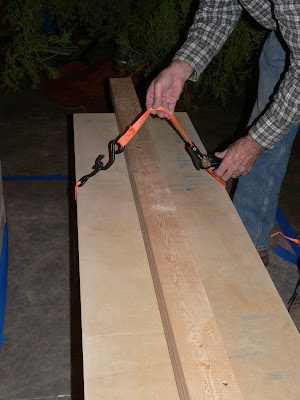 We used two 2 x 4's nailed together to make up a pulley system to lift the hearthstone unto the hearth.
Yep me and the Foresterman only.
This was definitely the Christmas of Paybacks...and Fireplace Inserts...and it was all...
lets say it together now -
OLYMPIC SIZED! 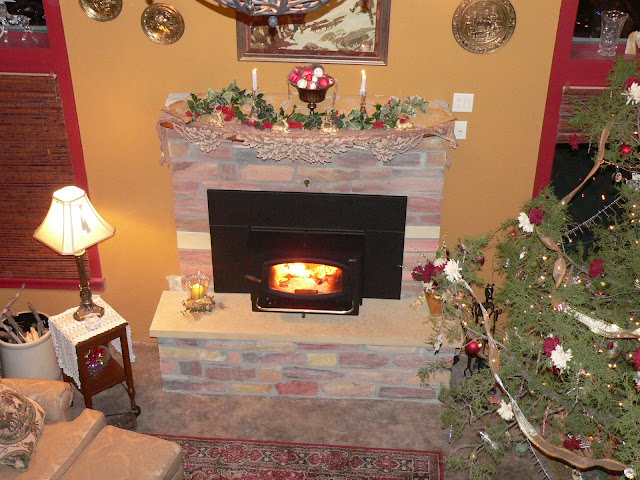 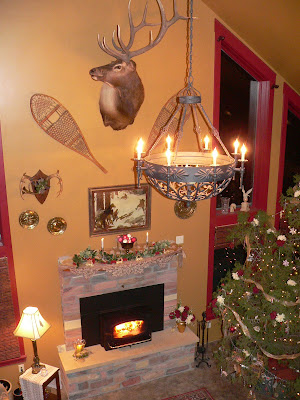