If you have been nosy-ing around here lately, you'll see that we havent had time to post anything, no sir-ee..


Because since we finished our Timber Cruising project for the year, this last week has been all about bringing home those "missing" animals of ours ~ Baby & Sally! We have hired a very reputable Horse Transportation company from Montana; they have a trip to the East coast to drop off horses, so they will pick up Baby & Sally in Wisconsin on the way back, and bring them home
RIGHT BEFORE Thanksgiving !!!
Im pretty sure it will kind of be like this ~
Well, except in true color, not sepia tones... and maybe without the grandpa and grandma...
or the massive amount of kids...and hopefully with electricity...
the depression/recession thang' is kinda the same though
but darn it, the same teary eyed feelings will be the same!!!!!
But first we have to build something to keep out the wind, snow and rain for them. 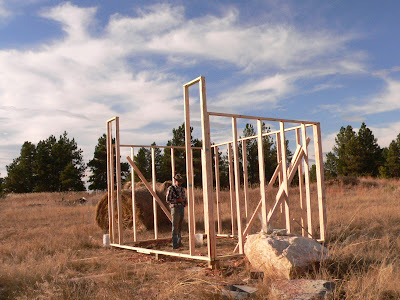 Basically we learned that since theres no extension cord long enough to carry power to build a horse shed on a 160 acre homestead parcel, everything must be fitted like legos beforehand - Mr. Foresterman did a great job lining up the bolt holes so we could put this together in a field closest to the house, facing the South to Southeast. He also really thought out the layout - it will slope from front to back to shed off snow, and it is bolted to the ground through long threaded rods placed at each corner and in the middle of the long walls; these are concreted in deep and will be the anchor for high winds, which are to be taken seriously in SE Montana.  The walls will be 2 by 6's lower, upper (beyond the kick zone) will be plywood.  There will be Steel roofing on top.  It will be backfilled once it is completed, to slope down and out.  We have approx. 3 more weeks to finish...And when its completed I'm sure Sally will christen it in that special way that only spiteful shetland pony mares can do... 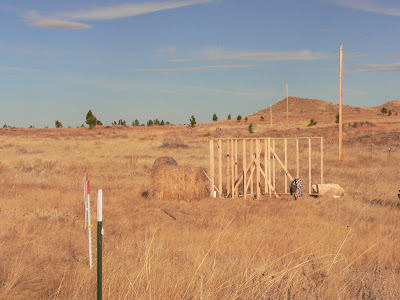 I have been also slamming t-posts in, and I am so glad I lived on a river with rocky ridges; otherwise I really wouldnt have appreciated that intense ripping pain in my palms again. I actually contemplated the following question as I pounded ~ "is it possible to remove your spinal cord from your skull doing this?".   Thank goodness I only had a few to do, as the rest is already fenced on side, only needs the electric tape. I am lucky that electric tape is something that Baby & Sally both respect.  Until the ground freezes. I am trying to dig a hole to China this week to set the ground wire... 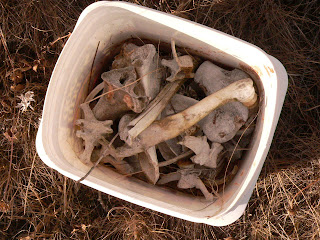 Then theres this.  Yes, bones.  Whose I dont know, but since the prior owners had wolf hybrids there are tons of bones near the house and in the "use to be" wolf pen.  I am scouring like mad and someone would think we were Ed Gein  (why is it they are always from Wisconsin??!?) with all the buckets I am turning up with filled to the top with...Bones...anyhow, nobody's feet are gonna be pierced  by them if I can help it.... 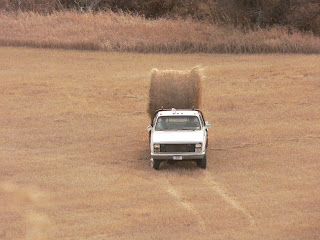 Then we needed to move some round bales off of our hay field to store nearby the shed for winter.  Our nice rancher neighbor to the north came with their really cool truck that can pick up and haul round bales, and did this task for us.  Did I say how nice they are?  I mean really nice.  The kind of nice that takes poor wandering Wisconsin folk under their wing and gives ranching advice without making them feel stupid or dangerous. Thats nice. Not that WE can do stupid or dangerous...well ...Anyhow... its nice to have nice north neighbors! 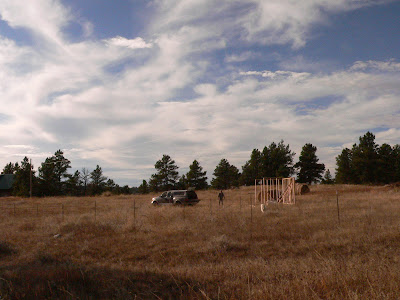 Setting up a dry paddock and building a 3-sided shed has kept us busy,
but it will be worth it when they finally come home~
I just know that Baby and Sally are going to love it here! 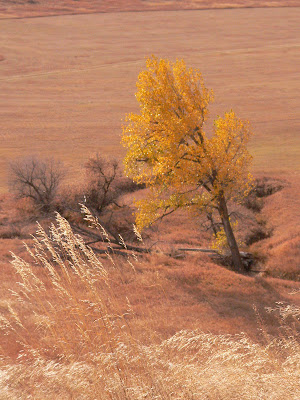